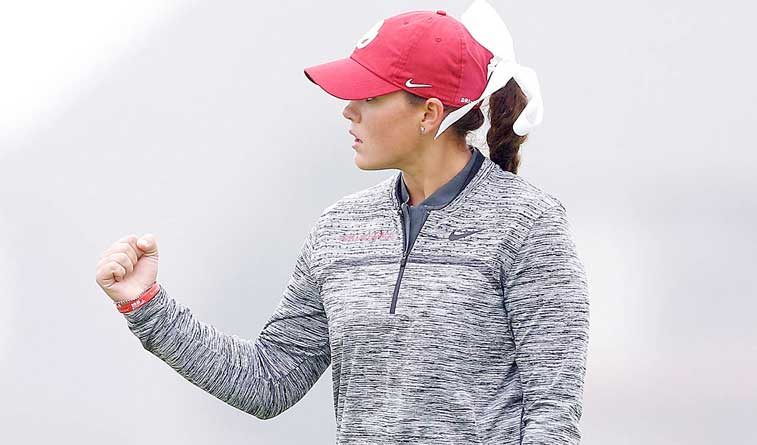 NORMAN – Oklahoma women’s golf came storming back in the Schooner Fall Classic with a record-breaking round on the second day of competition. The Sooners shot a 17-under 267 at the par-71, 6,048-yard Belmar Golf Club in Norman on Saturday – the lowest round in program history.

The Sooners broke their record for lowest round by nine strokes, with the previous best (276) coming at the 2013 Alamo Invitational.

“I’m really proud of everyone today,” said OU head coach Veronique Drouin-Luttrell. “Sometimes you need a bit of a reality check. Today was a great day for the Sooners. We took advantage of good conditions and look forward to the final round.”

Oklahoma was led by career-best outings from freshman Libby Winans and sophomore Sydney Youngblood, who each shot a 7-under 64 and combined to produce 15 birdies. The duo’s scores represented just the second and third times in school history that a Sooner shot below a 65.

The Sooners also saw a strong performance from sophomore Kaitlin Milligan, who shot a bogey-free round of 66 (-5) in the second-best round of her collegiate career. Playing in her hometown of Norman, Milligan is tied for 11th with a two-day score of (137, -5).

Two additional Sooners are competing in the event as individuals and their performances will not impact Oklahoma’s team score. Freshman Mikhaela Fortuna continued her strong showing in the Schooner by sinking six birdies to score a 4-under 67. Fortuna is tied for seventh with a 36-hole total of 136 (-6). Senior Karen Arimoto carded a 74 (+3).

Oklahoma tees off the final round on Sunday at 10:10 a.m. CT off of hole No. 1 and will be paired with golfers from Alabama and Texas. Live scoring is available on SoonerSports.com.