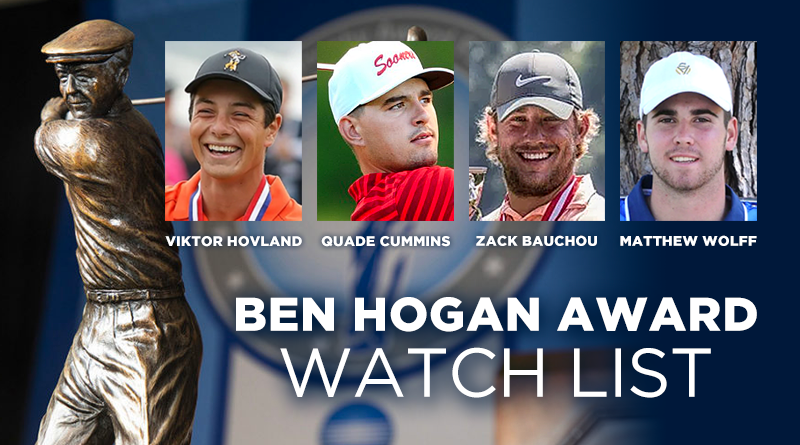 The Ben Hogan Award presented by Konica Minolta Business Solutions U.S.A., Inc. (Konica Minolta) is given annually to the top men’s NCAA Division I, II or III, NAIA or NJCAA college golfer taking into account all collegiate and amateur competitions during a 12-month period from June to May.

Cummins, a PING Honorable Mention All-American last season, posted a 70.00 stroke average during the fall season and earned a runner-up finish at the Ka’anapali Classic with a three-round 198 (-15). His 54-hole total at the event was the third-lowest ever by a Sooner.

The Weatherford, Okla., native also won the Sun Bowl All-America Classic in November, using a final round 62 (-9) to force a playoff where he earned the event title.

Bauchou was tabbed as a second-team All-American a year ago as well as a member of the U.S. Palmer Cup squad. He was also a semifinalist for the Jack Nicklaus Award and appeared on the Fred Haskins Award watch list. This past summer, he won the Canadian Amateur Championship for the second year in a row.

The Forest, Va., native was also in the field last year at the PGA Tour’s RBC Canadian Open and the Mayakoba Golf Classic as well as the Emirates Australian Open. Bauchou is currently No. 13 in the World Amateur Golf Ranking.

Hovland earned first-team All-America status last season and was a member of the International Palmer Cup squad. The Oslo, Norway native earned his first career victory at the Valspar Collegiate last spring and became the fifth Cowboy to win the U.S. Amateur Championship, doing so last summer at Pebble Beach. This fall, he shared medalist honors with Wolff at the Royal Oaks Intercollegiate and won the East Lake Cup as well.

Last summer, Hovland competed at the European Tour’s Porsche European Open as well as the PGA Tour’s Mayakoba Golf Classic and the Emirates Australian Open where he tied for 13thplace. In January, he made a start at the PGA Tour’s Farmers Insurance Open. Hovland is currently No. 4 in the World Amateur Golf Ranking.

Wolff was also named a first-team All-American and garnered the Phil Mickelson Award as the nation’s top freshman last season. He represented the U.S. at the Palmer Cup this past summer. The Agoura Hills, Calif., native earned his first collegiate victory this past fall at The Carmel Cup and has claimed medalist honors at all four of the Cowboys’ full-field events this year. He also emerged victorious at the Fighting Illini Invitational, the Royal Oaks Intercollegiate and the Amer Ari Invitational.

This year’s list of 10 semifinalists, which could include individuals not on the watch list, will be unveiled on Wednesday, April 17. On Thursday, May 2, that group will be pared down to three finalists. The finalists will attend a black-tie dinner at Colonial Country Club in Fort Worth, Texas, on Monday, May 20, prior to the start of the PGA TOUR’s Charles Schwab Challenge, where the winner will be crowned.

The Ben Hogan Award Selection Committee votes during each stage of the process. It is comprised of leaders in collegiate, amateur and professional golf. The Ben Hogan Trophy was first issued in 1990 and also included academic achievement in its original list of standards. In 2002, the Ben Hogan Award moved to Fort Worth, Texas, and revised its criteria to its current standard of honoring the outstanding amateur collegiate golfer.