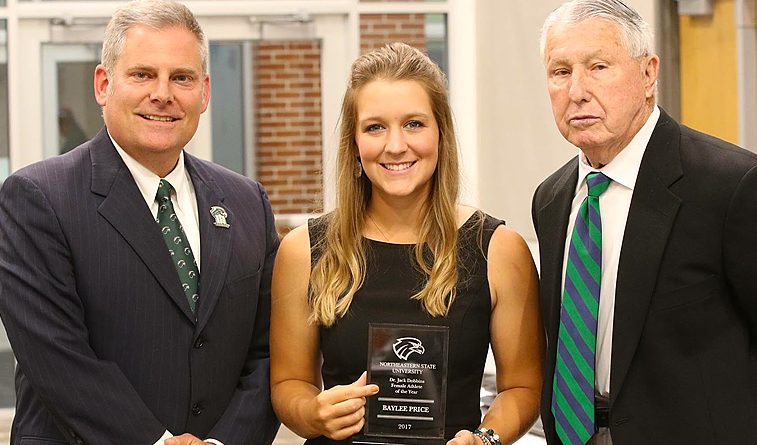 KANSAS CITY, Mo. – Northeastern State’s Baylee Price repeated as MIAA Golfer of the Year with the release of the league’s postseason awards on Friday morning.

Price, a four-year letter winner for the RiverHawks, was also named a first-team member for the fourth year in a row. She averaged 75.8 strokes per round in the spring season, and holds a 75.8 stroke average after 20 rounds this last season.  The Broken Arrow, Okla. native is one of four golfers to play for NSU in the NCAA Championship at least three times, and she was a 2016 WGCA All-American.

Joining Price on the All-MIAA First Team is Ebba Moberg who is a repeat selection, and averaged a 76.7 per round score this season. Moberg has seven top-10 finishes for the RiverHawks this season along with a tournament win at the Central Region Preview on April, 10-11.

Halie Wright earned Honorable Mention honors with a pair of top-10 finishes this spring, and a fourth place finish at this year’s MIAA Championship.

The RiverHawks are one of the six teams out of the MIAA who will be at the NCAA Super Regional on May 8-10 at the Minnehaha Golf Club in Sioux Falls, S.D.

Souvannasing is now a three-time member of the All-MIAA First Team. The junior won the league Golfer of the Year award as a freshman two seasons ago. She is made first team in each of her three seasons at Central.

Souvannasing finished 15th or better in 9 of 10 tournaments this year, her best two third-place finishes in the fall. She finished third at both the NSU Classic and the MIAA Fall Preview.

Mucciaccio is a first time all-conference selection. The junior has had two top-10 finishes this season and just missed a third when she finished 11th at Henderson State last month. Mucciaccio’s best finish was seventh-place at KickingBird Golf Course in Edmond at the Southern Nazarene event. She also took ninth at Northeastern State in the fall.

Roberts, just a freshman, is the only Broncho to win individual medalist honors this season. The Brownwood, Texas native won first-place at the Diffee Ford Lincoln Invitational at KickingBird earlier this spring. That win sprung her to a current streak of three consecutive top-10 finishes. Roberts has four top-10’s in her debut season.

Pool, also a freshman, added four top-20 finishes to the Broncho rotation this season. Her best came at KickingBird as well, when the Coffeyville, Kan. native finished sixth.

Central Oklahoma is headed to the NCAA Central Regional tournament next week. The Bronchos tee-off Monday, May 8 at Minnehaha Country Club in Sioux Falls, S.D. The tournament runs through Wednesday with the top three teams advancing to the NCAA Championships later this month.