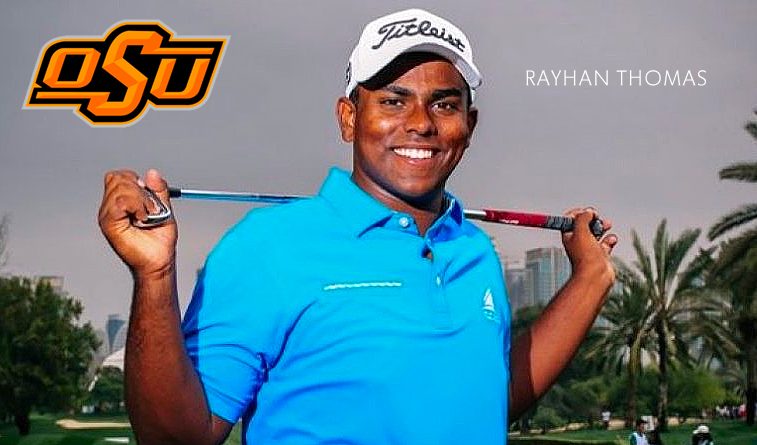 With the signing of Rayhan Thomas of India, Oklahoma State coach Alan Bratton filled out a foursome of signees ready to continue the tradition of excellence long established at OSU.

Thomas, who has been lauded by the likes of Rickie Fowler and Rory McIlroy, committed to OSU in February and has been tearing up the junior circuit and semi-professional events in the United Arab Emirates. Based in Dubai, he equaled a world record with nine consecutive birdies in one MENA Tour event and has impressed a bevy of European Tour professionals in playing numerous events on sponsor invitations.

Thomas is ranked 21st in World Amateur Golf Rankings, the highest for an incoming freshman at OSU that Bratton can remember. Three of his new teammates are in the top 50, including Viktor Hovland at No. 3, Matthew Wolff at 5 and Austin Eckroat at 49.

“He’s really, really good and a super nice kid,” Bratton said. “He is kind of the anchor of the class, but all four have great skill sets and our competitors. They all understand the responsibility of coming to Oklahoma State and they all have their best golf in front of them. None of them is anywhere near peaking.”

Stewart stands just 5-foot-5, but can generate 114 mph of clubhead speed and drive the ball 320 yards while hitting precise irons. He grew up a huge fan of Rickie Fowler, dressing like him as a youngster and that helped him choose OSU over his home state favorite school Colorado.

“Dillon came to our golf camp and that’s where we were first exposed to him,” Bratton said. “He’s really young and doesn’t even turn 18 until May. He won AJGA events in Colorado and Wyoming, won the Junior America’s Cup and his state high school championship. I love the trajectory he’s been on.”

Stark, a standout on the California junior circuit, was wanted by just about every program in the Pac-12, but chose the Cowboys for reasons he explained to the Hanford Sentinel below.

“On my weekend trip to Oklahoma State, I really felt at home,” Brian said. “Coach (Alan) Bratton and coach (Donnie) Darr are top D1 coaches and are great people. The golf team has two home courses within three miles of the school.

“I chose to be an Oklahoma State Cowboy for many reasons: the coaches, a great golf tradition (10 National Championships), a strong business school, the feeling that I had in my heart, and they have 20 former players on the PGA tour.”

Bratton said Stark, whose father Scott played collegiate football for Stanford and Pitt, is an excellent athlete with a well-rounded game, probably one of the top 10 players in his class.

Former Cowboy Bob May, who took Tiger Woods to the wire in the 2000 PGA Championship and is now a golf instructor in Las Vegas, tipped Bratton off to the fourth recruit, Hazen Newman of Las Vegas.

A lefty, Newman lost to Ashkay Bhatia on the final hole in the second round of the U.S. Junior and finished in the top 10 of the AJGA’s Ping Invitational at Karsten Creek.

“I like his ball striking, he’s got good speed and good fundamentals,” Bratton said. “I like what I heard about him from Bob. He and Dillon have a strong friendship as well, so that will help with the transition.”