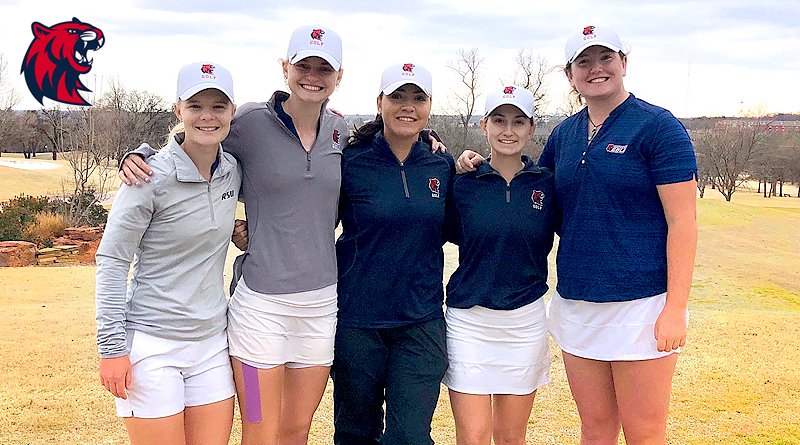 EDMOND, Okla. – The Rogers State Women’s Golf team sits in first place after a windy first round of the Diffee Ford Lincoln Invite at Kickingbird Golf Course. The Hillcats are the only team in the tournament to shoot under 300, finishing with 299 as a team in the first round. All five Hillcat golfers shot better than 80 for the round, the only team in the 17-team field to do so.

The Hillcats currently have two golfers, Jess Green and Grace Williams, in the top five and all five golfers are in the top 26 overall in the 94-golfer field.

Grace Williams finished a couple shots behind Green with a score of 74 and currently sits in a tie for fourth place, three strokes behind the leader. Williams had two birdies and 10 pars. Raquel Flores sits in the third spot for the Hillcats after shooting a 76. She is tied for 11th place after a round with two birdies and nine pars. Marybeth Bellnap is one stroke behind Flores, shooting a 77 to finish tied for 18th place after day one. Sydney Murray  shot a 78 to finished tied for 26th place. Murray had two birdies and nine pars.

Natalie Gough of Oklahoma City University held a share of second place after a 72 in the first round. The Stars, ranked eighth in NAIA women’s golf, stood third place among the field.

Gough posted a 72 to be tied with Rogers State’s Jessica Green and be one shot behind individual leader Zoe Morton from Southwestern. Gough made three birdies Monday.

Lauryn Pritchard gave OCU two golfers among the top 10. Pritchard, a sophomore from Allen, Texas, shot a 75. Pritchard sank three birdies.
The Stars’ Blayne Barker tallied a 78. Barker, a freshman from Durant, Okla., drained one of the three eagles among the tournament field. Melissa Eldredge, a senior from Eufaula, Okla., turned in an 81, while Lauren Behnken, a sophomore from Tulsa, Okla., added an 83.

OCU entered a second team that held ninth place with a 320 to be ahead of seven NCAA Division II teams. Arianna Medina, a junior from Phoenix, carded a 78, while Rachel Eckert, a sophomore from Bixby, Okla., and Adeline Norton, a freshman from Ardmore, Okla., contributed a 79. Norton led the tournament by making par 13 times. Clair Hill, a junior from Gig Harbor, Wash., and McKenzie McCoy, a junior from Beggs, Okla., each had an 84 for Oklahoma City.

Even by Oklahoma’s considerable standards, the wind blew unusually strong on Monday at Kickingbird Golf Course, and Oklahoma Christian’s first-round scores in the Diffie Ford-Lincoln Invitational reflected the conditions in which the players competed.

OC posted a team score of 316 and stood in eighth place among 17 teams in the annual early season event, which is serving this year as the Eagles’ spring season opener. The Eagles trailed the tournament leader, Rogers State, by 17 shots.

After morning rain storms passed through central Oklahoma on Monday, the wind remained, blowing steadily from between 16-23 mph throughout the round but often changing direction – sometimes from the west, other times from the northwest and southwest. Gusts blew up to 32 mph, providing challenging conditions for players to try and control even routine shots.

None of the 94 players touched par on the 5,821-yard course, with the leader, Zoe Morton of Southwestern Oklahoma State, posting a 1-over-par 71. OC’s top players, freshman Wilma Merenmies of Jyvaskyla, Finland, and sophomore Alexandria Bennett of Plano, Texas, each shot a 77 and were tied for 18th.

Juniors Felicity Wittenberg of West Pymble, Australia (80, tied for 40th) and Shaley Goad of Wheeler, Texas (82, tied for 46th) provided the Eagles’ other two countable scores on Monday, while freshman Alyssa Wilson of Yukon shot an 85 that left her tied for 61st.

Two OC players are competing in the tournament as individuals. Junior Elin Eriksson of Örnsköldsvik, Sweden, shot an 80 while sophomore Sarah Harrison of Edmond fired an 88, putting her in a tie for 77th.

The Eagles will tee off for the final round at 8:30 a.m. Tuesday, grouped with golfers from local rivals Oklahoma Baptist and Oklahoma City University.