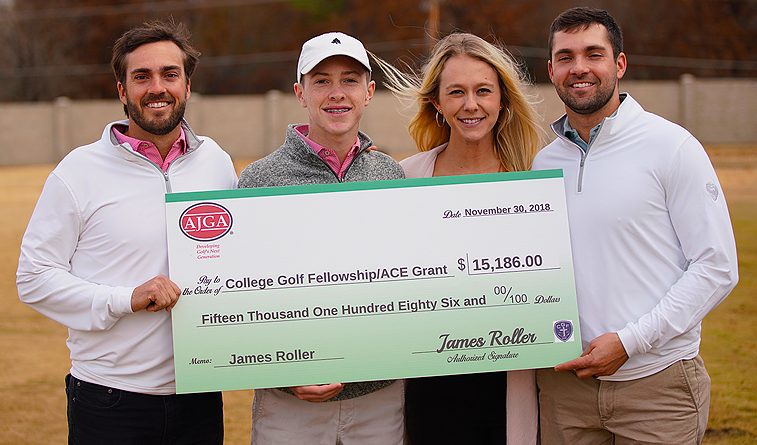 Non believers beware if you get paired with James Roller in a tournament.

“Four hours is a long time,” Roller said with a laugh. “And usually you are paired together for at least the first two rounds, so eight hours is really a long time.”

Roller said it with a smile, but he showed how serious he is about his faith as well as his golf by donating ½ of the money he raised in the Leadership Links program this summer to the College Golf Fellowship.

Roller sought pledges for birdies as part of a fund-raiser by the American Junior Golf Association and raised $15,186 . One half goes to the AJGA’s Ace Grant program and Roller chose the beneficiary of the second half.

The College Golf Fellowship has ambassadors that work with collegiate and high school players on bible study and strengthening their faith and has 19 staffers across the country. Two familiar to Oklahomans are Karsten Majors and Draegen Majors, golfing brothers from Bixby and both in attendance at Cedar Ridge Country Club Saturday as Roller made his donation before dozens of those who had supported his cause.

Also it was announced by Maggie Roller that Cedar Ridge, where she serves as director of instruction, will be the site of the Gateway Mortgage Group Tulsa Junior stop on the AJGA Tour in the summer of 2020. The Oaks CC was the site of inaugural event in 2018 and will host the tournament again in 2019. Maggie is the tournament organizer and host.

James, the Class 2A state champion at Regent Preparatory School, was one of the top seven fundraisers and as a reward played nine holes with Rickie Fowler on Nov. 13 at the Medalist Golf Club in Hope Sound, Fla.

Roller said Fowler was as nice and gracious as could be, even though there was some good natured smack talking, and that his best advice was to keep working on his short game. Fowler drove it 25 yards or so past Roller but most impressed with his putting.

“He has so much confidence in his putting, he just walks up and makes everything,” said Roller, who has committed to Texas Tech and will go after the Class 3A state title this spring as Rejoice Christian has moved up a classification.  “He told us that everyone out here can hit it great, on the greens is where you have a chance to separate yourself.”

Karsten and Draejen both spoke to the assembled parents and young golfers to explain the mission of College Golf Fellowship. Also testifying about the benefits of CGF and the positive effects on his life was former Edmond North star and current Arkansas golfer Tyson Reeder.