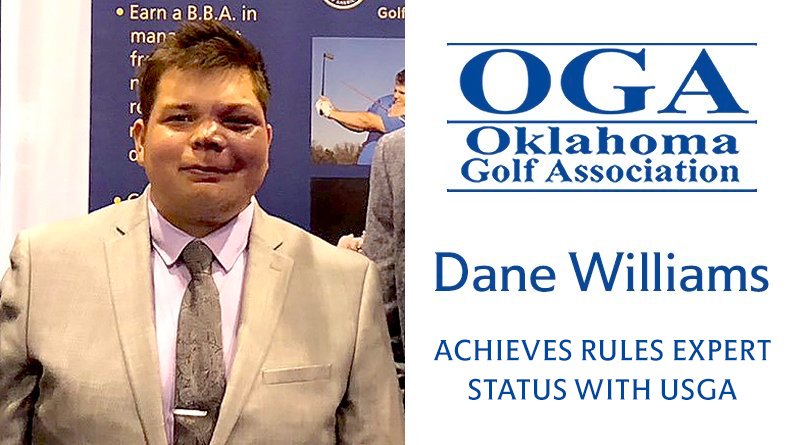 To be an “expert” on the Rules of Golf, one must score a 90 or better on the USGA’s multiple choice 100-question exam, with each question designed to trip up the inattentive reader and make certain you are thinking the question through on multiple levels.

Make way for another. Dane Williams, who was promoted from his internship to a full time staffer in charge of all USGA qualifiers in May after completing his classwork at the University of Central Oklahoma, achieved the Expert designation on only his second try, scoring 90 on a recent exam in Dallas.

“At 24, he’s probably the youngest I’ve heard of becoming an expert,” said OGA Executive Director Mark Felder. “People who know how hard this is will be extremely impressed. This is like passing the bar exam at age 15. He’s way ahead of his years.”

Williams, who grew up and played high school golf in Newcastle, planned to attend the University of Oklahoma before a friend and golf professional at Earlywine Golf Course in Oklahoma City suggested he try the Professional Golf Management program at UCO. He completed his classwork there in May and will officially graduate in December, but is already making his mark on the OGA.

Williams said that studying the Rules of Golf and the decisions book helped prepare him, but not as well as the last two summers of serving as a rules official at OGA and USGA events.

“Being on the course and running into all the weird things that can happen helped a lot,” he said. “It’s definitely the hardest multiple-choice test I’ve ever taken. You have to look at every part of the question.”

Phelps scored a 96 on the recent exam. Between he and Williams the OGA is set to carry on as long-time rules directors Gene Mortensen and David Thompson pull back.

“We couldn’t have two better guys to fill the shoes of what David and Gene have done,” Felder said. “The golf association is sitting good as far as rules and competitions.”

Next time you square off against your long-lost Scottish cousin at Royal Dornoch, your handicap index and his should provide a fair match, with the advent of the World Handicap System beginning in January, 2019.

So as you settle bets over your favorite scotch in the pub, don’t blame the system for your losses. The R&A and the USGA have combined to offer the new system which was designed to eliminate any irregularities between the two systems previously in place, which here in the U.S. was GHIN.

All clubs and courses that used GHIN through the Oklahoma Golf Association will be using the WHS system in 2020. On Dec. 30, all those using GHIN will not be able to access their handicap information until the new system switches on Jan. 6. The clubs and courses will then reactive and the new app will be active for your smart phones. The app can still be downloaded at www.GHIN.com

Your handicap index could change slightly. The new system uses the best eight scores of the most recent 20 rounds rather than the best 10 scores as previously. A net double bogey is the maximum score allowed and the system will take care of that automatically if hole-by-hole scores are entered.

The new system can also take into account playing conditions to some extent. If a slew of very high scores are entered for a particular day in a particular location, it will take the differential between that and normal scoring into account.

The maximum anyone’s handicap can rise over a 12-month period is five strokes.

For more specific questions on the new system and how it will be implemented at your club or course, contact your local PGA professional or call Jay Doudican, the handicap expert at the OGA at 405-848-0042.

Correction: An earlier version of this story left Pat McKamey off the list of active rules experts in Oklahoma. Golf Oklahoma regrets the error.