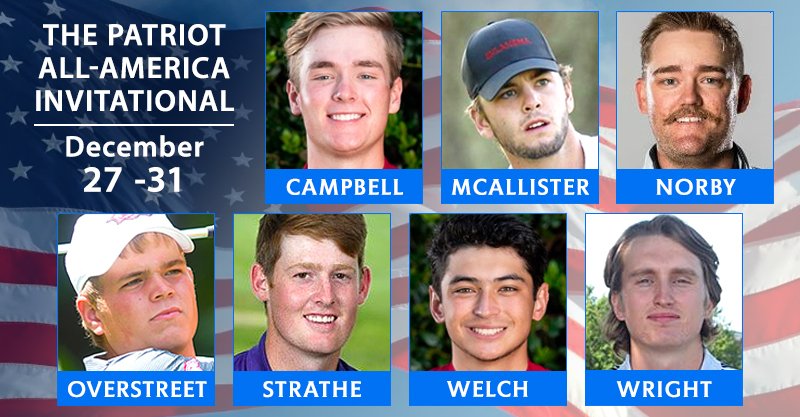 Three current University of Oklahoma players are among a group of players with state ties who have been selected to play in the elite collegiate all-star event, the Patriot All-America Invitational.

Logan McAllister of Oklahoma City, Patrick Welch and Stephen Cambell Jr. will represent the top-ranked Sooners in the field. Also included are Mason Overstreet of Kingfisher and the University of Arkansas, Jared Strathe of Owasso and Oral Roberts University, Trevor Norby of Oklahoma Christian and Bradley Wright of Rogers State University. The complete field is here.

Those earning invitations into the Patriot All-America field include enrolled collegiate golfers who were named to current-year GCAA All-America teams for NCAA Divisions I, II and III, the NAIA and NJCAA Divisions I and II .In addition to the collegians invited, the rest of the field is made up of selected members of the U.S. Military, Naval and Air Force Academies, GCAA national award recipients, members of the most recent Palmer Cup Teams, American Junior Golf Association (AJGA) All-Americans and Toyota Junior Golf World Cup participants currently enrolled in their freshman year of college.

The 54-hole tournament will be played from Dec. 29-31 on the par-70 Gold Course at Wigwam Golf Club. Alumni of the tournament include PGA Tour stars Brooks Koepka, Justin Thomas and Bryson DeChambeau.

“It is a great honor to have Trevor representing OC at the Patriot All-America,” OC coach David Lynn said. “He will get to test his game against the best amateur golfers in the world. He is very deserving of this opportunity, because of his great play in 2019-20. Trevor knows he can play with that field and I look forward to him getting that chance.”

The tournament benefits the Owasso, Okla.-based Folds of Honor, a charitable organization that provides college scholarships for children and spouses of U.S. military service members who are killed or disabled while serving in the nation’s armed forces.