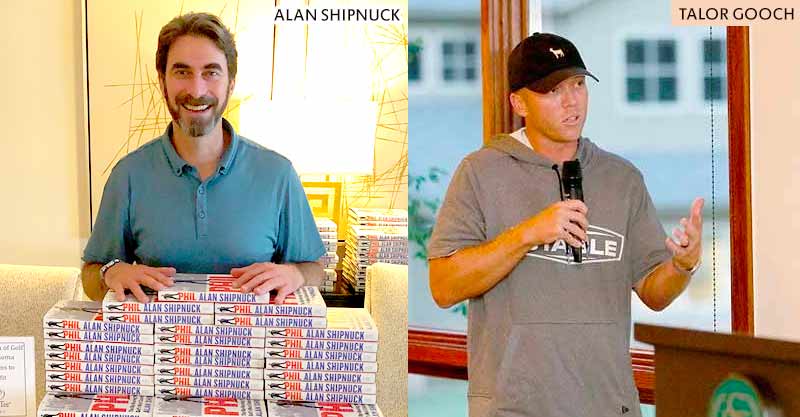 Sportswriter Alan Shipnuck had an attentive audience Tuesday evening at Cedar Ridge Country Club as he did a book signing and reading from his new unauthorized biography of Phil Mickelson, a book from which an except about Mickelson’s views on the Saudi-funded golf league and the PGA Tour eventually led to Mickelson withdrawing from competitive golf, including his defense of this week’s PGA Championship at Southern Hills.

In a lively question and answer session, Shipnuck explained and defended his reporting and also stressed the many good things Mickelson has accomplished in his extraordinary career.

The celebration also included a Q&A with Talor Gooch, the only Oklahoma born player in the field, as well as a presentation by Lieutenant Governor Matt Pinnell and State Rep Sheila Dills on the new Oklahoma Golf Trail bill recently passed by State Legislature.

Oklahoma Golf Hall of Fame 2021 inductee Danny Edwards discussed his new book Driven. Also honored was Jenni Roller, daughter of Cedar Ridge Director of Instructor Maggie Roller, who recently set a state record by shooting 62 in the final round of the Class 3A state championship, then followed that up with a 7-under 66 to win the Oklahoma Junior Masters at Southern Hills.

The event was a fund-raiser for the First Tee of Tulsa and executive director Janice Gibson thanked the attendees and reported that the program has now touched the lives of over 120,000 students since its founding in 2000.