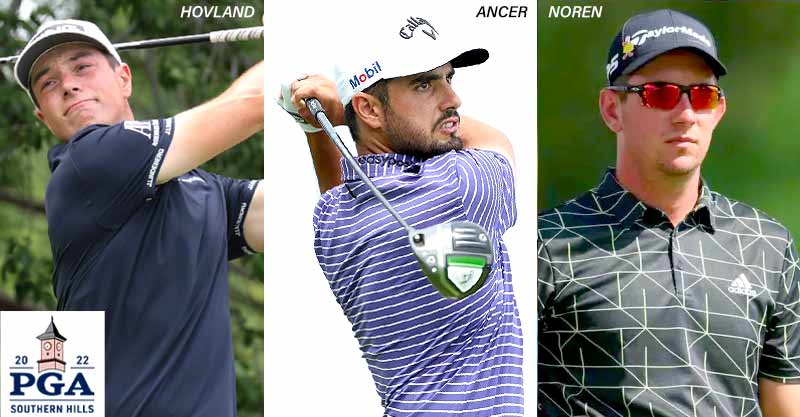 Former Oklahoma standout Abraham Ancer and his Crimson-clad supporters scattered throughout Southern Hills Country Club checked in with a 3-under-par 67 during Thursday’s opening round of the 104th PGA Championship.

Among his fans were members of the No. 1-ranked OU men’s golf team.

“There was about on average eight to ten ‘Boomers’ yelling at me every single hole,” Ancer said. “It’s nice to feel the support. You see a lot of Crimson out there. I talked to coach (Ryan) Hybl this morning. I saw (current All-American) Chris Gotterup was out there, part of the team is here watching. It’s a really neat feeling, the support, and it’s nice to see them boys win yesterday. It was awesome.”

Ancer finished with six birdies, three bogeys and stood in a tie for fourth when he arrived for his post-round interview session.
“Definitely a solid round,” Ancer said. “I was just always pretty much in the right spot of the fairways it felt like, except the first two holes that I missed the fairways. Other than that, felt like I hit it really good off the tee and some good iron play, as well. Whenever I missed the green, I was in a bunker and it wasn’t too bad of a spot. I only got one up-and-down. Really wanted to make those putts for par on the other ones. But it’s all good. I’m happy with my score and the way I played today.”
After making bogey on No. 16, Ancer responded with a birdie at No. 17.
“Yeah, definitely lunch tastes a lot better when you come in with a birdie,” Ancer said. “I felt like I played really, really well for maybe like a 5-under round, but I’m never going to be asking too much after that. I know this is a tough golf course and it can go the other way quickly. Happy the way I played. Happy I made birdie on 17 and a nice par there on 18. Wanted to make that one — that would have been a plus making birdie on 18, for sure.”
Playing a morning round on the other side of the course, former Oklahoma State All-American Viktor Hovland saw the omnipresent color of orange in the gallery and heard incessant shouts of encouragement from Cowboys fans.
“It was a lot of fun, hearing a lot of ‘Go Pokes’ and ‘Go Viktor’ and a lot of good support out there,” acknowledged Hovland, the world’s No. 6-ranked player.
Hovland and his worshipers had to settle for an even-par 70 on the restored Perry Maxwell layout.
A native of Norway, Hovland began on No. 10 tee, one group ahead of the juggernaut threesome of Rory McElroy (65), Jordan Spieth (72) and Tiger Woods (74).
Hovland parred his first 10 holes before birdieing the 508-yard, par-4 second hole and followed with a bogey on No. 4. He then parred his way in to stand in a tie for 23rd when he finished.
“I was out of position a couple times, and instead of maybe letting that linger with the mood a little bit … When you hear people are rooting for you, it’s kind of easy to snap out and refocus. It’s been fun so far,” Hovland said. “I would have liked to have made a couple more birdie putts. Certainly, I had a few good looks that I didn’t take advantage of, but felt like I did a lot of good stuff today.”
Playing partners Will Zalatoris (66) and Cameron Smith (68) sizzled with under-par rounds, drawing praise from the affable Hovland.
“I think my game is going in the right direction, so hopefully I can kind of play more along the same lines as I did today and just kind of make a couple of key putts like Will and Cam did out there today,” Hovland said. “It was fun to watch.”
Swede Alex Noren was another former OSU All-American with a morning tee time and also opened with an even-par 70.
Facebook Comments