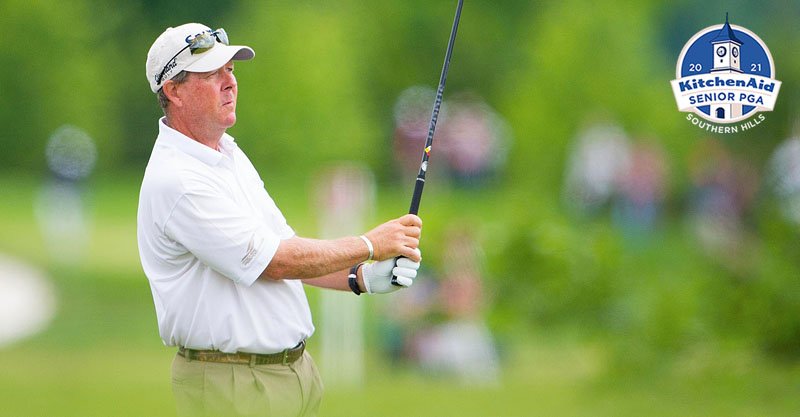 It’s funny how things work out.

If Gregg Grost hadn’t stopped in a dive called The Gin after attending a wedding in Oxford, Miss., in the summer of 1986, Glen Day would not be a proud representative of the Oklahoma Sooner golf program.

Who knows, he may not even be a professional golfer. Instead, he’s a strong candidate to win when the 2021 KitchenAid Senior PGA Championship is contested at Southern Hills, an event Day is looking forward to immensely.

Back to that chance meeting in Oxford. Day, a headstrong youngster from Poplarville, Miss., was more enamored with fraternity life than golf early in his Ole Miss career. A meeting with coach Ernest Ross and Athletic Director Warner Alford resulted in Day being “politely” told he had two weeks to clear out.

Grost had recruited Day a bit in high school and recognized him in the campus dive. They struck up a conversation which ended with Day telling Grost he was going to come play for him at Oklahoma.
“That was the last I thought about it,” Grost said. “Then in August, I get this call. “Coach, I’m on my way. See you in three days.”

Grost said come on, and sure enough Day was there a few days later, beginning a wild two-year ride that left both frazzled at times, but also with great mutual respect and a long-lasting friendship.

“We argued every day,” Grost said. “It was always about something different. He was just so passionate about playing and loved being at Oklahoma. And now, we’ve been best friends ever since.”

The starting five in 1987 was Day, Todd Hamilton, Grant Waite, Craig Perks and Doug Martin. Each of the five except Martin, who at that time was regarded as the strongest player, wound up winning at least one event on the PGA Tour, while Martin, now the golf coach at Cincinnati, won on the Nike Tour. Rick Bell, longtime Ping rep in Oklahoma, was a reserve during Day’s two years and a starter on the 1989 team that won the national championship at Oak Tree CC. His son Ryan is now a starter on the Norman High School team coached by Grost and he and Day have remained close through the years.

Day led the Sooners to a runner-up finish in the NCAA Championship as a senior. The following year holdovers Martin, Matthew Lane and Jeff Lee joined with Tripp Davis and Bell to win it all.

Early upon Day’s arrival at OU, Grost sent Day to Houston to see swing instructor Dan Snider, with whom Day works with to this day. Snider remembers Day arrived with empty pockets, but Snider talked him into paying for his lesson by babysitting his three kids while he and his wife went to a Rockets game.

“I came home and the kids are running wild through the house and Glen is sound asleep on the sofa,” Snider said.

Next day they went out in a rainstorm for their first lesson. Snider asked Day if he still wanted to go through with it and Day replied he had come there to work on the swing. So for the next four hours Day hit balls in the rain under Snider’s tutelage.

“I went home and told my wife this kid is going to be successful,” said Snider, a member of the South Central Section Hall of Fame who teaches now out of The Alotian near Little Rock. “He’s got the determination and the work ethic. And he was.”

After leading the Sooners to eight wins and finishes of second and third in two NCAA Tournaments, Day was ready for pro golf. He met Jennifer Ralston, daughter of another section Hall of Fame member Bob Ralston, at the Arkansas Open in 1990. The two have been happily married since and their two daughters both went to Ole Miss. No hard feelings.

“Everything in life happens for a reason,” Day said. “I saw Coach Alford at a deal years later. I stuck out my hand and said ‘Coach, I don’t know if you remember me.’ He said, ‘son, I’ve watched your entire career and I am so proud of you.’”

Day’s father-in-law Bob Ralston worked as both a club pro and a touring pro. One of the nicest men you could meet off the course, his intensity on the course was legendary.

“Harvey Penick was asked what was the best golf swing he ever saw,” Day said. “He said it wasn’t Ben Hogan or Bryon Nelson or Sam Snead, it was this club pro out of Arkansas that you probably never heard of. He was talking about Bob.”

After two years in Asia and a year on the European Tour, and armed with a dependable fade that kept him consistently in the center of the fairway, Day earned his PGA Tour card in 1994. He stayed out there consistently until 2010, earning his lone victory at the MCI Classic in 1999. He has also played frequently on what is now the Korn Ferry Tour until joining the Champions Tour in 2016, where he finished second twice in 2018 and two more times in 2020. He is still as competitive as ever, though he has changed his approach through the years.

“Golf is about 98 percent mental,” Day said. “I’m just approaching the game differently in a lot of ways. Later in your life, you’re not so full of testosterone. You’re more relaxed and laid back, I don’t get as upset on the golf course. I’m playing the same as I always have. I just accept my mistakes lot easier, allowing me to get past a lot of shots and move on to the next one.”

Except for being overly deliberate, resulting in his nickname “All Day,” it would be hard to find many Day critics. And his play seems to have only gotten stronger of late.

“He’s a very intelligent player who knows where to hit it and where not to,” Snider said. “For a long time he had a phenomenal short game. It may not be as good now, but his ballstriking has gotten better and better.”

Day said fans who attend The Senior PGA Championship will be amazed at the distance and accuracy of the players even into their 60s.

“They don’t market the Champions Tour the way they should, but the product they put out is just awesome,” Day said. “The event in Tulsa is going to be great. I can’t wait to see the course and I know a lot of folks there including, of course, (head professional) Cary Cozby and that’s a great OU connection.”