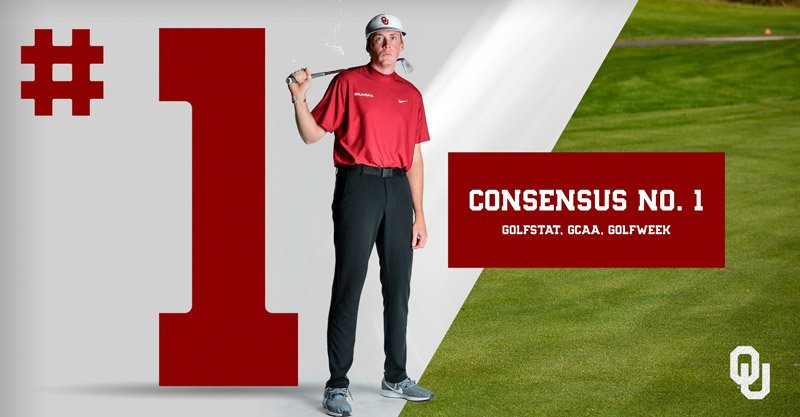 Two weeks after being jumped in the polls by Florida State, the Oklahoma men’s golf team reclaimed the top spot in all three national polls and will enter the postseason as the consensus No. 1 team in the nation.

The Sooners earned 21 of the possible 23 first-place votes in the GCAA Coaches Poll and leapfrogged No. 2 Florida State in the Golfstat rankings too. Ryan Hybl’s team has been the top-ranked squad all season in the Golfweek/Sagarin poll. The Sooners defeated the Seminoles by nine strokes, No. 5 Texas by 16 shots and No. 6 Wake Forest by 23 strokes at the Calusa Cup last week.

Oklahoma State, currently running away with the Thunderbird Collegiate, is ranked third by Golfweek. The Cowboys are seeking their fourth win of the spring season. Oklahoma is led by a trio of All-Americans in Jonathan Brightwell, Quade Cummins and Garett Reband, who all sit inside the top 15 of the PGA Tour U rankings. In addition to the three redshirt seniors, the Sooners’ lineup boasts two others inside the WAGR top 100 in juniors No. 40 Logan McAllister and No. 87 Patrick Welch.

OU notched four wins in its eight regular-season 54-hole tournaments and has finished inside the top five at 23 of its last 24 tournaments. The team’s scoring average of 284.33 is the fifth-lowest in program history, and its -3.375 score versus par is good for third-best all-time.

The Sooners and Cowboys are set to compete in the Big 12 Championship on April 26-28 at Prairie Dune CC in Hutchinson, Kan. Oklahoma won the conference championship in 2018 and will face a tough test with No. 3 Oklahoma State, No. 5 Texas, No. 23 Texas Tech and other talented teams in the field.

Following the Big 12 Championship, OU will await its NCAA destination, which will be revealed during the NCAA Selection Show on May 5.