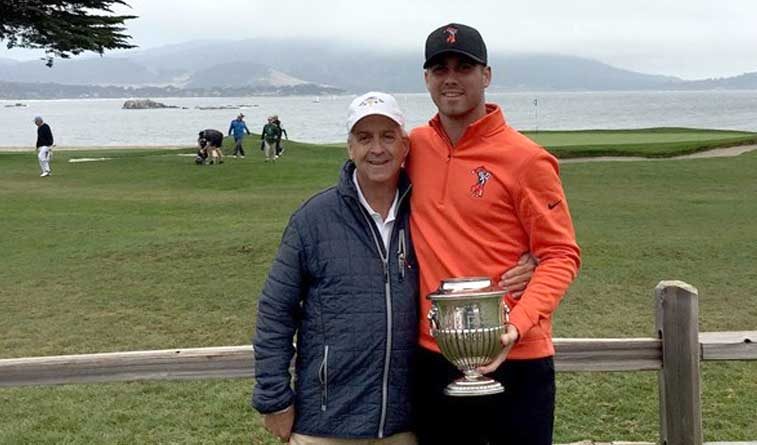 The No. 3 Oklahoma men’s golf team claimed the team title at the Carmel Cup on Sunday to wrap up its opening event of the 2018-19 season. The three-day, 54-hole tournament was held at the iconic par-72, 6,828-yard Pebble Beach Golf Links in Pebble Beach, Calif.

Each team competed with six golfers at the Carmel Cup, and the low five scores counted toward the team total each round. The Sooners finished the final round with a three-day total of 1034 (-46), recording a 358 (-2) during Sunday’s action.

The victory marks the 21st win for the Sooners under 10th-year head coach Ryan Hybl. OU has won five of its last seven tournaments dating back to last season.

“This was a great week. We did not have our best stuff today, but this is a tremendous way to start the year,” Hybl said. “Garett Reband and Riley Casey played some really good golf all week, but everyone did their part in order for us to come out on top.” Reband took second place on the individual leaderboard with a three-day 200 (-16), just one shot back of Oklahoma State’s Matthew Wolff (199, -17). The Fort Worth, Texas, native carded a 70 (-2) during the final round. Reband’s 54-hole total of 200 marks the fourth-lowest three-day score in program history. The junior played bogey-free on Sunday, recording a pair of birdies on the front nine.

Casey earned his first top-5 finish of his career at a team event, tying for fifth place at 204 (-12). Casey carded a 70 (-2) during Sunday’s final day of action. The junior’s three-day score of 204 set a career low for the Abilene, Texas, native.

Senior Blaine Hale finished with a 75 (+3) during the final round to tie for 13th place at 210 (-6). Senior Brad Dalke opened and closed his round with birdies and finished with an even-par 72 on Sunday. Dalke finished in 18th place with a three-day total of 211 (-5).

The Sooners return to action on Sept. 9-10 at the Gopher Invitational.

Oklahoma State’s 15-under tally tied Georgia’s score for the low round of the day at the par-72, 6,828-yard layout. OSU finished at 1,045, 35-under par, and nine shots behind the Bulldogs for second place.

Wolff entered the day one shot off the pace of OU’s Garett Reband before carding a bogey-free 68 during his final round to clip the field by a shot. Wolff posted his first birdie of the day at the par-5 second and made the turn in 2-under 34 after adding a birdie at the eighth. He got to 3-under with a birdie at the 10th before carding his fourth of the round at the 16th.

For the week, Wolff carded 17 birdies and an eagle against just two bogeys en route to his winning total of 17-under 199.

Senior Hayden Wood joined Wolff in the top 10, tying for ninth place at 208 after signing for a 69 during his final round.

Senior Zach Bauchou carded a 71 during his third round to finish at 212 and tied for 19th place.

Junior transfer Ferdinand Müller carded the squad’s low round of the day, finishing with a 67 to get in with a 213 total and tied for 22nd place.

Sophomore Austin Eckroat’s 70 tied him for 35th place at 218, while freshman Rasmus Neergaard-Petersen finished in 47th place at 227 after a closing 80.