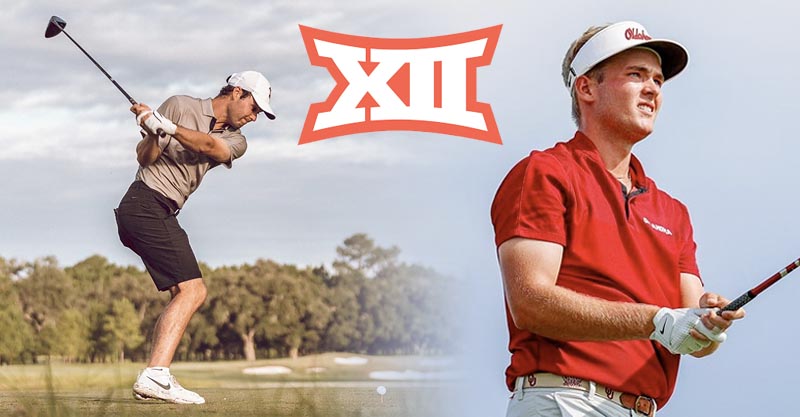 HOCKLEY, Texas – Oklahoma State’s men’s golf team tied TCU during its lone match on Tuesday morning while the Oklahoma Sooners tied Kansas in their lone match during the second day of action at the Big 12 Match Play Tournament at Houston Oaks.

The Cowboys will enter tomorrow morning’s final session of pool play with a 2-0-1 mark after splitting their six individual matches against the Horned Frogs at the par-71, 7,007-yard layout. OSU will play Texas early Wednesday to close out pool play, while OU will face Texas Tech. If both teams win they will meet Wednesday afternoon for the championship.

OSU’s trio of Eugenio Chacarra, Leo Oyo and Brian Stark all won their matches on Tuesday to improve to 3-0 during the event.

Chacarra cruised to a 4-and-3 win over Chris Berzina and Oyo took care of Thomas Allkins, 2 and 1, to remain perfect at the event.

Stark won the final hole of his match against Jacob Skov Olesen to emerge with a 1-up win and secure the Cowboys’ third point of the day.

Aman Gupta fell, 1 up, in his match against Gustav Frimodt, while Dillon Stewart was defeated, 5 and 4, by Justin Gums. Jonas Baumgartner took on Aymeric Laussot, falling 5 and 3.

Top-ranked Oklahoma had its hands full with No. 9 Kansas but can still advance to the championship match with a win over Texas Tech Wednesday morning.

“We knew Kansas would be a tough match and it was just that,” head coach Ryan Hybl said. “We need to do a better job of putting pressure on the golf course. We still control our destiny tomorrow against Texas Tech, but know that it will take a round of great golf to advance to the championship.”

Following the afternoon session, OU (7 pts.) sits second in Pool A behind Texas Tech (9 pts) who is 3-0 on the week.

OU won the first three matches of Tuesday’s contest convincingly as Stephen Campbell Jr., Chris Gotterup and Logan McAllister dispatched their Jayhawk foes early. Gotterup hit the clubhouse first with a 5 and 4 win over Hank Lierz, followed by a 4 and 3 victory from Logan McAllister over Luke Kluver. Redshirt freshman Stephen Campbell improved to 3-0 on the week with a 2 up win over Davis Cooper.

The remaining three matches were close coming down the stretch, as the Sooners hunted down the half point they needed to win the match. Freshman Drew Goodman was knocked off 3 and 2 by senior Callum Bruce and then redshirt freshman Jaxon Dowell fell 2 and 1 to senior Ben Sigel. The final match between OU sophomore Ben Lorenz and KU’s top-ranked golfer Henry Hillier came down to the 18th hole as the two entered the day’s final hole all square. Hillier chipped in to win the hole, knocking off Lorenz 1 up, tying the match and forcing a draw between the two top-10 teams.

Gotterup and Campbell Jr. have produced three wins en route to a perfect start at their first match play championship, while McAllister is undefeated at 2-0-1 on the week. Gotterup, a redshirt senior, has provided the Sooners with a +15 mark in hole differential, which is a better mark alone than six teams at the competition.

The Sooners and No. 10 Red Raiders square off in a de facto semifinal match at 8 a.m. Wednesday. The victor will face the winner of No. 2 Oklahoma State and No. 5 Texas in Wednesday afternoon’s title match.

The Big 12 Match Play Championship consists of three days of play at the par-71, 7,007-yard Golf Club at Houston Oaks, guaranteeing each team five matches throughout the week.

Live scoring of Wednesday’s matches can be found on Golfstat. Pairings for the match will be made available shortly before tee time.