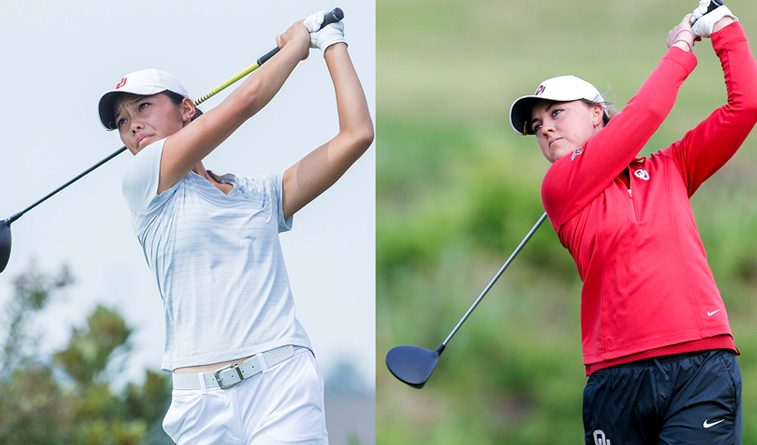 Soo ranks third in the Big 12 in scoring average with an average round 72.37. The junior from South Yarra, Australia, boasts five top-10 finishes in nine events, including two top-five showings. The highlight of Soo’s season thus far came when she led the Sooners to a win at the Clover Cup while also claiming the individual crown.

Soo also received All-Big 12 honors in 2016-17 and is one of four golfers on this year’s list to make the All-Big 12 Team in each of the past two seasons.

Wood was previously named to the All-Big 12 Team in 2014-15. She and Soo are now the seventh and eighth golfers in program history to be named to the conference squad in multiple seasons.

Both Soo and Wood are within decimals of the program record for lowest season scoring average (72.26), set by Chirapat Jao-Javanil in 2012-13.

The duo and the 20th-ranked Sooners are back in action May 7-9 for the NCAA Austin Regional at University of Texas Golf Club in Austin, Texas. The Sooners aim to qualify for the finals of the NCAA Championships for the fourth time since 2012.

Broze earned her third career All-Big 12 nod, while Chen was selected for the second time. The pair represents the 14thand 15th All-Big 12 selections under fifth-year head coach Courtney Jones, who will lead the No. 16 Cowgirls into NCAA Regional play next week in San Francisco, California.

Outside of 1997 and 1998, the opening two years of the conference, the Cowgirls have placed at least two golfers on every all-conference team. In all, Cowgirls have accounted for 55 All-Big 12 selections, which is 21 more than the next closest league foe.

Broze is playing the best golf of her career in 2017-18, and leads the Cowgirls with a 73.58 stroke average. The senior has finished 11th or better in all six events this spring, including a second-place finish at the Dale McNamara Invitational in Tulsa.

Oklahoma State will play in its 25th consecutive NCAA Regional on May 5-7 at the TPC Harding Park in San Francisco. The low six teams and the low three individuals not on those teams at each of the four NCAA Regional sites (for a total of 24 teams and 12 individuals) advance to the NCAA Championships, which are being hosted by OSU from May 18-23 at Karsten Creek, the home of Oklahoma State golf.