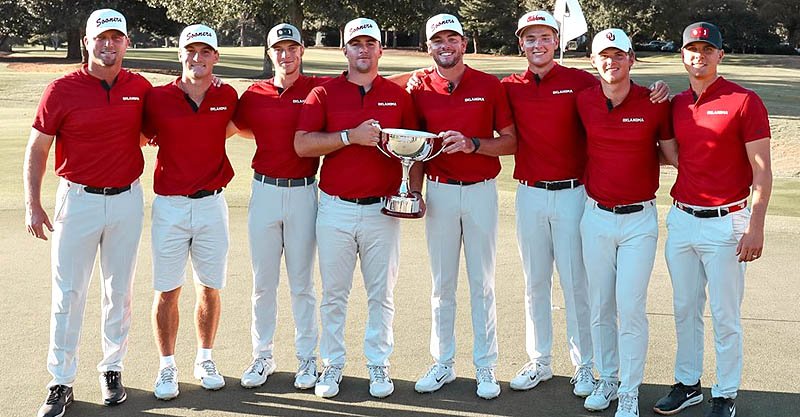 ATLANTA — It was a putt Oklahoma State All-American Eugenio Lopez-Chacarra makes 99 times out of 100, but this was the one that got away. A par putt on the par-5 18th hole of about 18 inches sailed wide, allowing his match with Oklahoma redshirt freshman Jaxon Dowell to slip into a tie, which turned into a loss on the first playoff hole.

That sudden turn proved to be the difference as Oklahoma edged Oklahoma State 3-2 in the championship match of the East Lake Cup on Wednesday.

“I’m just excited for the guys” said Hybl. “I mean, the ebb and flow of match play is so unique. If you’re looking at a computer screen, at one point we were just dead in the water…So just really, really excited about the guys having that moment at the end of the day. You know, it’s nice to get a little in-state rivalry, too, so that’s a little icing on the cake.”

Logan McAllister put the Sooners on the board with an early 5 and 3 victory over Brian Stark. McAllister never trailed in the match and was 5-up after the first nine holes.

“I struck the ball really well today,” McAllister said. “I was in play off the tee pretty much every hole and I was pretty much on the green. Out here if you can hit 16 greens, you’re probably going to do pretty well, and I did a great job of hitting fairways and hitting greens and just keeping the pressure on him the whole time.”

A few minutes later, Dowell notched the second point with his come-from-behind win. Dowell was 2-down heading to the 16th hole and ultimately tied the match on 18 when it looked bleak. Chacarra was nearly on the green in two, then chipped up to a distance that may normally have been conceded if not for the import of the short putt remaining.

The two went into a playoff on the 15th. Dowell’s tee shot found the green, while the Chacarra found a greenside bunker and eventually made bogey, giving OU its second point.

For OSU, junior Rayhan Thomas trailed by two through 10 holes before rallying in his match to record a 1-up victory over Stephen Campbell, Jr. Senior Rasmus Neergaard-Petersen built a 5 up lead and held on to claim a 2 and 1 win over Drew Goodman to tally OSU’s second point of the day.

In the final and deciding match, OU senior Chris Gotterup and OSU junior  junior Hazen Newman were all square through 10 holes, but Gotterup won four of the next five holes to prevail 4 and 3 and provide the match’s deciding point.

“I’m just really happy,” Gotterup said. “You know, it’s been our goal to come here and play well. Obviously there’s been a little bit of a stigma against us in match play and we know what we’ve got and I think we showed that today. We’re really happy to get this win.”

The title marks OU’s second Bedlam match-play win in three weeks and closes the fall slate. The East Lake Cup is Oklahoma’s second win of the fall, a stretch where the Sooners never finished worse than second place in a stroke-play event.

The finish marked the second time the Cowboys have finished as the runner-up at the event after falling to Texas in the title match in 2019.