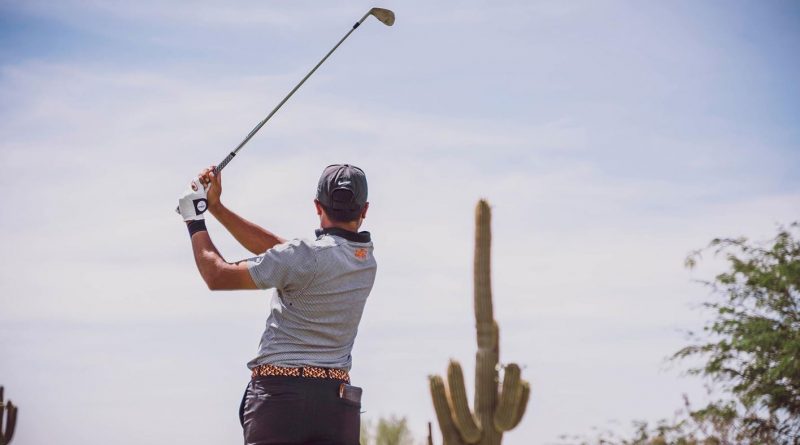 SCOTTSDALE, Ariz. – On a day when the NCAA Championships’ field shot an average of 13-over par, the top-ranked Oklahoma men’s golf team fired a championship-low 275 (-5) and holds the 36-hole lead at Grayhawk Golf Club at the midway point of the national championship.

Oklahoma State used a 3-under 277 during the second round  to rise five spots into third place.

The Sooners will enter Sunday’s third round 25 strokes ahead of the 54-hole cut and 21 shots clear of the critical match-play cut that follows Monday’s final stroke-play round. On the individual front, a trio of Sooners in Chris Gotterup, Logan McAllister and Drew Goodman, sit inside the top six of the race for the individual national championship. If any of the three were to win the individual crown, they’d become the third Sooner ever to win the title, joining Walter Emery in 1933 and Jim Vickers in 1952.

“It was nice to play a golf course that was yielding some birdies,” head coach Ryan Hybl said. “Outside of Chris (Gotterup), we didn’t start out super phenomenal but we got some firepower started around the turn. On nine, 10, 11 and 12 we made quite a few birdies, with Patrick Welch and Drew Goodman leading the charge there. I’m excited about where all of our guys are at, especially with Logan (McAllister) and Chris there on the back end.”

Gotterup (T4, -1) led the Sooners on day two at the six-day, par-70 championship by signing for a 66 (-4) to move from 42nd into a tie for fourth and just two back of the lead. The Haskins Award finalist posted four birdies on the way out and maintained a clean card thru 14 holes. A final birdie on No. 17 erased a bogey on the 15th to sneak back into the top five. His 4-under 66 was the third-lowest round on a day where the average score was nearly five strokes over par.

Making his charge up the leaderboard in round two was fellow Haskins finalist Logan McAllister (T6, E). The senior joined Gotterup under par, signing for a 69 (-1) on Saturday after collecting a 70 (E) on Friday. McAllister is in line to secure a spot inside PGA Tour U’s top five and earn status on the Korn Ferry Tour following the championship.

True freshman Drew Goodman (T6, E) continued to shine in his first postseason action. Goodman, who fired an even-par round on Friday, opened his second round with four bogeys on the front nine. He made the turn on Saturday at 4-over for the week but then rattled off birdies on Nos. 10, 11, 14, 16 and 17 to get into the red before a bogey on the 18th pushed him back to even. Just three strokes off the lead, he’s attempting to become the first Sooner freshman to win a national championship.

Patrick Welch (T42, +6) and Ben Lorenz (T75, +9) rounded out the Sooners’ lineup on Saturday. Oklahoma counted Welch’s score in the second round as the senior posted a 70 (E) behind six birdies and six bogeys. Stephen Campbell Jr., the designated substitute, will take Lorenz’s spot in Sunday’s round.

The championship is contested over 72 holes of stroke play, with the field being cut from 30 to 15 teams after 54 holes. Following 72 cumulative holes, the field will be narrowed down to eight teams who will square off in a quarterfinal, semifinal and final match to determine a national champion.

The Cowboys head into tomorrow’s third round just four off the pace at 566.

Vandy’s Cole Sherwood claimed the top spot on the individual leaderboard with a 67 to stand at 3-under 137.

OSU rode the momentum of senior Aman Gupta, who carded a 65 to move into a tie for second place at 138. Gupta opened with three consecutive pars before posting back-to-back bogeys at the fourth and fifth.

He would catch fire through the middle of the round reeling off three consecutive birdies to close his front nine and turn under par. He made it five in a row with birdies at the 10th and 11th before carding pars at the 12th and 13th. He would move to 5-under for the day with birdies at Nos. 14 and 15 before coming home with three pars in a row.

After opening with a 69 on Friday, sophomore Bo Jin signed for a 74 during his second round to finish at 143 as well.

Junior Brian Stark moved 30 spots up the board after carding a 71 to get in with a 145 total and tied for 32nd place.

Sophomore Jonas Baumgartner rebounded from an opening 80 to post a 71, jumping 52 places into a tie for 98th at 151.