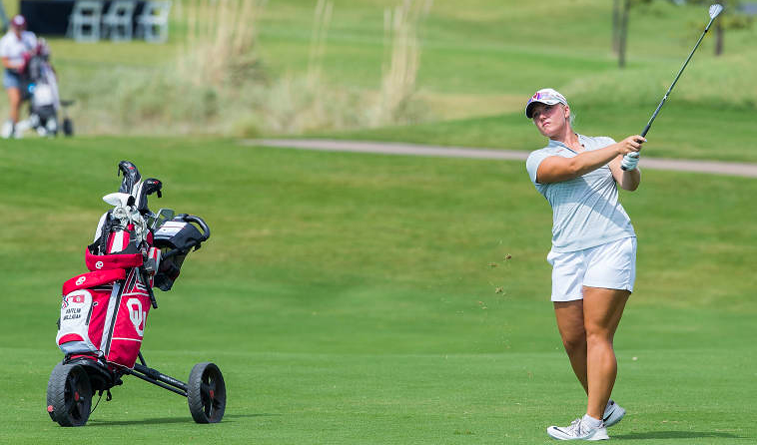 Oklahoma women’s golf used another record-breaking day to win the Westbrook Invitational on Monday, finishing the tournament with a program-record three-round score of 839 (-25). The Sooners edged second-place Ohio State by one stroke at the par-72, 6,252-yard Westbrook Village Golf Club in Peoria, Ariz., to claim their first tournament win since 2014.

Oklahoma won the 15-team event behind freshman Kaitlin Milligan, who finished in second place with a 54-hole total of 17-under 199 – the lowest individual tournament score in OU history. A Norman native, Milligan shot a 69 in Monday’s round to become the first Sooner golfer to produce a sub-200 score in a three-round tournament.

The freshman had opened the event with a 10-under 62 in Sunday’s first round, marking the lowest 18-hole score in program history (previous low was 65), the best in Big 12 history and the lowest in NCAA Division I women’s golf this season. Over the three rounds, Milligan totaled 20 birdies and only three bogeys.

Oklahoma’s win marked its third top-two finish of the season and was highlighted by strong play down the stretch to seal the victory. The four Sooners whose scores contributed to the team total collectively sunk 10 birdies on the final six holes of the course.

“I’m very proud of our team,” said OU head coach Veronique Drouin-Luttrell. “It’s been a long time coming. We’ve put ourselves in this position so many times and I’m really happy with how we were able to finish. We made some huge putts coming down the stretch and it seems like we are taking the next step as a team. Winning is a great feeling and will only fuel us to get better every day.”

The victory is Oklahoma’s 49th tournament title and 10th win under Drouin-Luttrell.

Milligan was joined in the top 20 of the individual standings by seniors Ana Ruiz and Hannah Wood. Ruiz took eighth place with a 210 (-6) in her fifth career top-10 finish. Wood recorded a 213 with three consistent rounds of 71s to tie for 20th place.

Senior Rylee Pedigo tied for 52nd with a 220 and junior Karen Arimato tabbed a 223.

Ohio States Jacyln Lee won the individual medal with a 197, two strokes ahead of Milligan.

The Sooners were able to put together their record-breaking total without junior Julienne Soo in the lineup. A constant at the top of the OU lineup, the Australian native spent the week competing at the Women’s Amateur Asia-Pacific Golf Championship in Singapore.

Oklahoma is back in action next week when it heads to Coral Gables, Florida for the Miami Invitational. The three-day tournament tees off Monday, March 5.