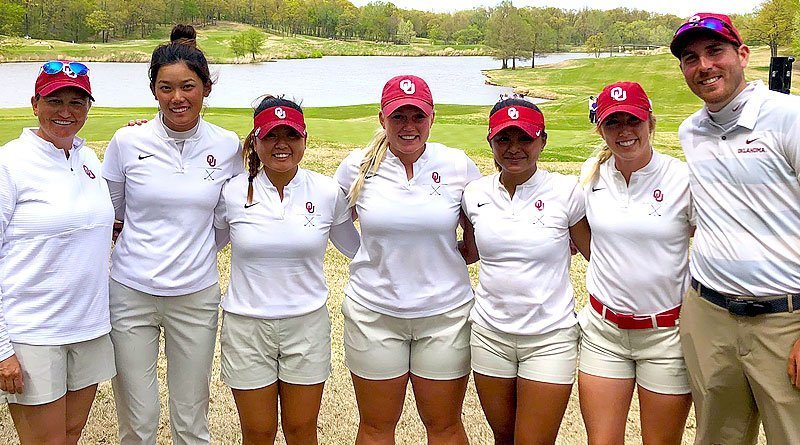 Second-ranked Texas took the top four spots in a dominant performance at the Big 12 Women’s Golf Championship which concluded Tuesday at the Golf Club of Oklahoma, running away with the team title by 37 shots over Baylor.

Agathe Laisne won the individual title at 2-over 218 after a final-round 75, three shots ahead of Longhorn teammates Kaitlyn Papp and Sara Kouskova. Emilee Hoffman finished fourth at 223.

For the state schools, Tuesday was a mixed bag.

No. 18 Oklahoma improved by three spots to finish third and take some momentum into hosting an NCAA Regional May 6-8 at Jimmie Austin OU Golf Course. Senior Julienne Soo, after struggling the first two rounds, began to figure out the Tom Fazio design, matching Papp for the day’s best score of 1-under 71. Teammate Libby Winans closed with a 76 to notch a top-10 finish, placing sixth at 225.

Oklahoma State slipped from third to sixth after a final round 315, its worst of the tournament. Nothing is certain, but OSU’s window to a regional berth, barely a crack to begin with, may have been slammed shut. The Cowgirls, one of only 10 teams to qualify for regionals every year since the qualifying format was introduced, came into the event ranked 67th by Golfstat. Although 72 teams are invited to regionals, some spots are automatic berths to conference champions who are not necessarily ranked in the top 72. It was thought OSU would need to move up to about 55 in the rankings to earn a spot in regional play.

OSU coach Courtney Jones met with her squad in a close circle after and told them how proud she was of the effort they gave. She started three freshmen and a sophomore and has a talented recruiting class of five newcomers lined up for the 2019-20 season.

Jones said she thought all of her players have the ability to improve greatly and become top flight collegians. Leading the way in this event was junior Michelle Forsland, who tied for eighth at 227. Lianna Bailey, a 22-year-old freshman from England that Jones recruited after originally trying to sign her younger sister, tied for 14th at 229.

“If you miss it in the wrong spot here, you’re going to make bogey,” Soo said. “That was me all the way through the first round and half the second round. I kind of got it together on the back nine yesterday. I started to realize where I needed to miss it. It’s a very hard course.”

As unfamiliar as the Sooners were with the Golf Club of Oklahoma, they will be at home when the regional begins at “The Jimmie” as the players call it. Soo said there may be some added pressure playing at home, but that will be offset by the players knowing every inch of the course.

“We’ve seen The Jimmie a thousand times,” Soo said. “It’s going to be all mental for us, as we should know every nook and cranny around there. We’ve just got to put down that pressure on us because we’re hosting. You’re expected to play well because it’s your own course.”

Soo said all the times the team practiced in terrible weather should have them prepared no matter what Mother Nature brings that week. The regional assignments will be assigned on April 24. Each of the four regionals will have 18 teams and the top six will advance to the NCAA Championship May 17-22 at The Blessings in northwest Arkansas.