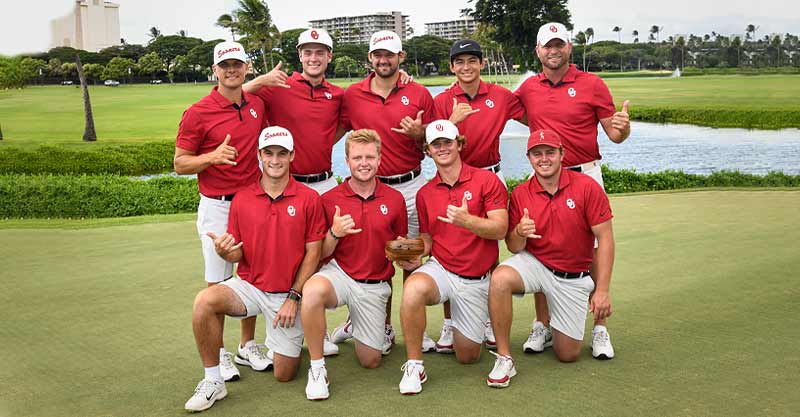 LAHAINA, Hawaii — For the second time in as many tries, the Oklahoma men’s golf team took home the team title at the Ka’anapali Classic at the Royal Ka’anapali Golf Club in Lahaina, Hawaii, on Sunday. The Sooners were dominant over the final 36 holes and won the event by 12 strokes.

In a reprise of the 2019 Oklahoma team that set a then-school record to win the Ka’anapali Classic, the 2022 Sooners (811, -41) took a commanding lead in Saturday’s second round and never looked back, distancing themselves  from the 20-team field to claim the 36th overall title of the Ryan Hybl era.

“When the conditions got tougher, our guys just got tougher, and I loved seeing that all week,” Hybl said. “This was a nice way for our guys to finish off the fall and we’re pumped about getting into the offseason grind.”

The weekend’s victory marked the 12th straight full semester that Oklahoma has won an event, as the Sooners have at least one team title in both the fall and spring in each of the seven seasons, excluding the shortened 2020 spring.

A trio of Sooners finished tied for fifth, while two more landed inside the top 20. The Oklahoma lineup counted rounds from all five golfers in the lineup. That streak would’ve extended to seven different players had OU’s unattached players, Jase Summy and Luke Kluver, been part of the Crimson and Cream contingent.

Oklahoma led the field in birdies (72), eagles (5) and in scoring on par-3s and par-4s. All seven Sooners ranked in the top 35 in terms of birdies for the weekend, led by Summy’s 18. Four Sooners posted an eagle at Royal Ka’anapali, including Holbrook and Goodman, who each had two.

Sunday’s victory marked the close of Oklahoma’s fall season that saw the Sooners post three top-three finishes and a record-breaking 4-1 week at the Big 12 Match Play Championship. Oklahoma will head into the offseason with its eyes set on a title defense at the Puerto Rico Classic to open its spring on Feb. 12-14.