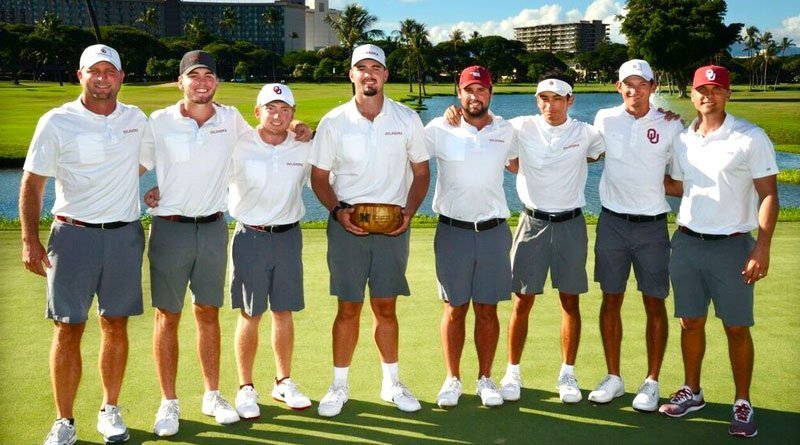 Led by Quade Cummins’ 9-under 62, the Sooners fired a 21-under-par  263 in Sunday’s final round, marking a school record (according to records dating back to the 1993-94 season). The squad pocketed one eagle and 29 birdies on the day. All five members of the team lineup finished under par for the round and the tournament.

The 263 marks the lowest team round since the Lone Star Invitational, besting the previous record by four strokes. It brought the Sooners’ total score to 47-under 805, also a tournament record, 19 strokes ahead of the previous mark.

“This has been a great week for us and to finish the fall off this way is icing on the cake,” said coach Ryan Hybl. “All of our guys did a great job this week at some point, we did a great job of finishing today. The guys really executed coming down the stretch and that keeps showing me growth in them.”

Starting the day one back, OU passed No. 18 Washington, which finished with at 810. UCLA took third at 817, and Georgia earned fourth at 819. South Carolina rounded out the top five at 820.

Cummins led the Sooners’ success, making birdie on his first seven holes en route to the 62. This was his second bogey-free round this weekend to end up in a playoff against Georgia’s Trent Phillip’s. Phillips birdied the seventh playoff hole while Cummins parred to finish second overall.

The Weatherford, Okla. native’s 62 marks his lowest collegiate round and matches the school’s low record set by Blaine Hale. Cummins’ 54-hole 20-under 193 sets the school record low. The previous mark was Abraham Ancer’s 195 total set at the Desert Shootout in 2011.

“Quade had one of the best events in our program’s history and he has worked hard to get to this point,” said Hybl. “I am excited to see him continue to reap the benefits of his work.”

Fellow senior Garett Reband tied for 10th at 204.  In the final round, Reband shot 1-under 70 for the second time this week to earn his second top-10 finish this season, the ninth of his career.

The Sooners will carry the momentum into the offseason. OU returns to action for the spring slate on Feb. 16-18 at the Puerto Rico Classic in Rio Mar, Puerto Rico.