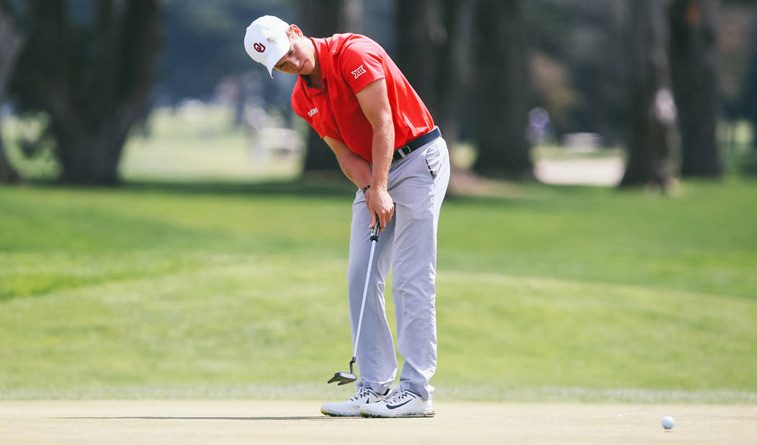 The No. 4 Oklahoma men’s golf team led deep in the back nine but dropped to third place down the stretch Sunday at the ASU Thunderbird Invitational. Oklahoma State rallied to within a shot of the lead, but eventually finished fourth, snapping the Cowboys seven-tournament winning streak.

“We had our opportunities today and we just did not capitalize on them coming down the stretch,” OU head coach Ryan Hybl said. “This will be a great lesson for our guys and we are looking forward to getting back to work before the Big 12 Championship.”

Redshirt sophomore Quade Cummins was OU’s top-finisher, earning sole possession of third place with a three-day 9-under 204. Cummins’ 54-hole total set a career low as the Weatherford, Okla., native, finished with a 1-under 70 during Sunday’s final round. The redshirt sophomore has recorded four top-10 finishes in five appearances in OU’s lineup this spring.

Junior Blaine Hale carded a 70 on Sunday to finish tied for 12th place at 209. The junior started the day with an eagle and a trio of birdies through four holes.

Senior Grant Hirschman turned in OU’s low round of the day, recording a 69. Hirschman finished with a three-day even-par 213, tying for 27th place.

Sophomore Garett Reband carded an ever-par 71 on Sunday to tie for 31st at 214. Senior Brad Dalke finished in 33rd place, posting a three-day 215. Dalke recorded a 73 during Sunday’s final round.

At the ASU Individual Invitational, senior Rylee Reinertson fired a 66 (-5) on Sunday to claim his first individual win of his career. The two-day individual tournament was held at the par-71, 7,316-yard Papago Golf Course in Phoenix, Ariz.

Reinertson recorded an 8-under 205 to win the individual event by five shots. During Sunday’s 18 holes, Reinertson played a near flawless round and carded six birdies.

Redshirt sophomore Thomas Johnson tied for 20th place at the individual event, finishing with a three-day 223. Johnson recorded a 72 during Sunday’s final round.

The Sooners now begin preparation for the postseason and will compete in the 2018 Big 12 Championship at Southern Hills Country Club in Tulsa, April 23-25 (Monday-Wednesday).

OSU would post the low round of the event by any team and the day’s low score by six shots, finishing with a 14-under 270 tally. At one point, the Cowboys made a run at the leaders during the third round, getting within one shot of the lead on the back nine. OSU tallied a 54-hole total of 17-under 835 to finish three shots clear of Arizona.

UNLV’s Shintaro Ban and Colorado’s Yannik Paul posted matching 69s to remain tied for first in the individual race at 202, 11-under par.

OSU’s Sam Stevens fired a closing 67 to earn a top-10 finish, rising nine spots into a tie for sixth place at 207. The senior went out in 4-under 30 after opening with three birdies in a row before adding a fourth at No. 8. He birdied the first two holes of his inward nine before carding bogeys at the 12th and 16th for an even-par 37 on his back nine.

Zach Bauchou went bogey free on Sunday with a 65 to jump 25 spots into a tie for 12th place at 209. The junior carded three birdies on each nine to get to his 6-under round.

Freshman Matthew Wolff signed for his low round of the event, a 3-under 68, to finish at 210 and in sole possession of 14th place.

Senior Kristoffer Ventura posted a 72 to finish at 212 and tied for 19th place, while sophomore Viktor Hovland’s 70 tied him for 34th place at 216.

At the par-71, 7,316-yard layout, Nick Heinen led a trio of Cowboys who registered top-five finishes. The junior closed with a 73 to finish at 2-under 211 and in third place. Senior Brendon Jelley and freshman Austin Eckroat each finished at 213 and tied for fourth place. Jelley posted a 71 during his final round, while Eckroat signed for a 72.

Senior Stratton Nolen posted his second consecutive 74 to finish at 223 and tied for 21st place.