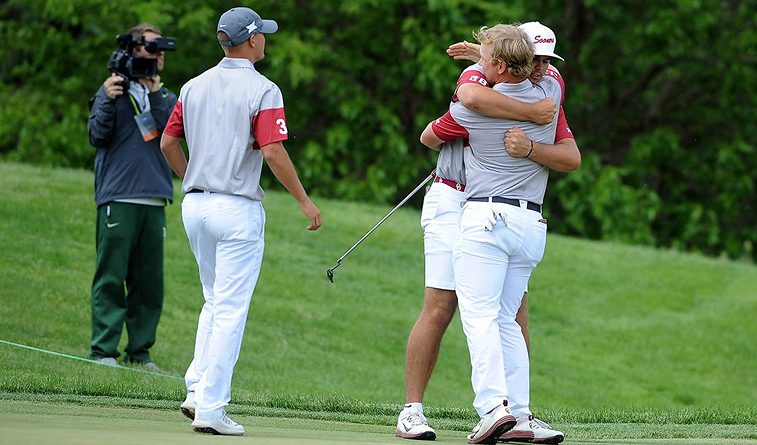 For the first time in program history, the Oklahoma men’s golf team will play in the NCAA Men’s Golf Championship Final as the Sooners advanced through two matches on Tuesday. OU rolled past Illinois, 3-1-1, in the semifinal match after coming back to down Baylor, 3-2, in Tuesday morning’s quarterfinal at Rich Harvest Farms in Sugar Grove, Ill.

OU will face defending national champion Oregon in the title match on Wednesday afternoon. The teams are scheduled to begin tee times at 2:10 p.m. CT.

This marks the first time in school history the Sooners have qualified for the title match. It comes in the program’s second all-time and second consecutive appearance in match play, which was introduced to the championships in 2009.

OU will look to win its second NCAA title in program history on Wednesday. The Sooners won their first NCAA Men’s Golf Championship in 1989.

“What a great day for Oklahoma golf,” eighth-year head coach Ryan Hybl said. “I can’t put into words what this opportunity means for us, and our guys have earned it all this week. We have one more to knock down tomorrow, and our guys will be ready.”

The Sooners, who are seeded No. 2 in match play, qualified for the title match by way of a 3-1-1 victory over No. 3 Illinois.

Sophomore Blaine Hale got the Sooners on the board first with a 4 and 3 win over Illinois’ Edoardo Lipparelli. Hale struck early with a win on hole No. 1, and although the golfers went back and forth on the front nine, Hale never trailed in the match. Wins on holes No. 10 and No. 14 put Hale at 4-up, and he halved the 15th hole to claim the victory.

Senior Max McGreevy earned OU’s next win, downing Giovanni Tadiotto, 2 and 1. McGreevy also won the first hole, and he held an advantage over Tadiotto throughout the round. The senior clinched a win on the challenging 17th hole to seal the match.

Junior Rylee Reinertson’s 3 and 1 victory over Michael Feagles finalized Oklahoma’s win over Illinois. Following Hale and McGreevy’s lead, Reinertson also won on hole No. 1, but he lost on holes Nos. 2-4 to quickly go 2-down. However, the Sooner bounced back with wins on Nos. 6, 7, 9, 10 and 11 to take a 3-up advantage. The two golfers went back and forth on the remainder of the back nine, but Reinertson won hole No. 17 to restore his 3-up lead and send his team to the title match.

Junior Grant Hirschman halved his match with Illinois’ Nick Hardy. The duo was all-square when the match was suspended after Reinertson’s win. Sophomore Brad Dalke fell to Dylan Meyer, 1-down.

In the quarterfinal match, OU rallied on the back nine to defeat Baylor, 3-2, and advance.

Down 2-0 with three matches left on the course, Reinertson and Hirschman came through with a pair of 1-up victories to tie the match. Dalke sealed the come-from-behind win as the sophomore defeated Baylor’s Matthew Perrine, 1-up, in 19 holes to help the Sooners advance.

At the one point during the quarterfinals, OU trailed in all five matches. Reinertson worked his way back from 3-down through eight holes versus Baylor’s Garrett May. Reinertson grabbed the lead on No. 17 with a birdie to put the Sooners on the board. Hirschman, who was 3-down at the turn in his match against Baylor’s Hunter Shattuck, sunk an eagle putt on No. 18 to tie the match at 2-2.

Dalke battled back and forth with Perrine down the stretch to win the match for the Sooners in a sudden-death playoff. Perrine pushed the match into a playoff after chipping in from the fringe on No. 18, but Dalke kept his composure on the first playoff hole and buried a 6-foot putt to complete the comeback effort.

The Golf Channel will televise thhe championship match  live from 3-7 p.m. CT. Live scoring will also be available on GolfStat.com.