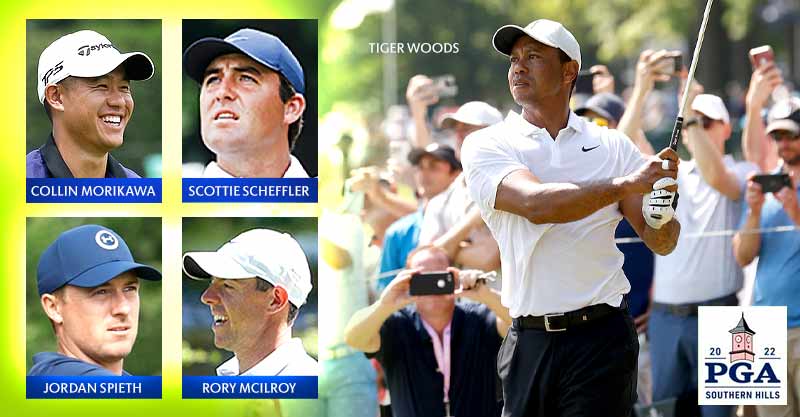 Given that Southern Hills Country Club hasn’t hosted a major since the 2007 PGA Championship and also is fresh off an $11-million restoration project four years ago led by architect Gil Hanse, most touring pros are being exposed for the first time to the new-look Perry Maxwell masterpiece.

Leading up to the 104th PGA Championship that starts Thursday, compliments have overflowed from the mouths of the world’s finest players during their pre-tournament interview sessions.

Scottie Scheffler, the world’s No. 1-ranked player who claimed victory at the Masters six weeks ago, captured the Big 12 Conference individual title here as a freshman at Texas in 2015. But that was Old School at Southern Hills.

“I came out a couple weeks ago and played a practice round,” Scheffler said. “Outside of that, I didn’t feel like Gil made any massive changes to the course and it still played fairly similar to how I remembered it other than a lot of the run-offs are a bit different. But outside of that, it still feels pretty much the same. You know, I haven’t heard any bad things about the golf course this week. It’s one of those places I feel like if you come and play it the first time you kind of know where to hit the ball. It’s just really hard. It’s right in front of you. You know what to do. It’s just hard to actually do it.”

“It’s just different,” Woods said, comparing Southern Hills to 15 years ago. “It’s more faster, wide open. We saw how the seniors played it (in the 2001 Senior PGA Championship). A lot of balls were hitting and runs off to the sides, where that wasn’t the case when we played in ’07. It was catching in the rough. For me, I think there’s more slope in some of these greens. Obviously, there’s more waves in the fairways and hitting very different clubs off of tees.

“But still, it’s a challenge … It’s going to be hard. It’s going to be fair. The rough is at a great length. It’s interesting because you can get a ball that comes out hot or you can get a ball that doesn’t come out at all. That’s the great guessing game of playing Bermuda (grass), and then with the surrounds being cut down how they are, there’s a lot more grain than we ever had to deal with. There are going to be different shots. I’ve seen guys using hybrids, and I’ve seen guys use 3-woods, putts, wedges, 4-irons. You’ll see a lot of different things.”

Four-time major champion and two-time PGA Championship winner Rory McIlroy is looking for his first major crown since winning the 2014 PGA. This is his virgin voyage at Southern Hills.

“I really liked it,” McIlroy said. “I didn’t know what this place was like before Gil got his hands on it, but I think he’s done a wonderful job with it. Love the green complexes. I love that he gives you options off the tee. I think you’re going to see a lot of different strategies this week, guys hitting driver where maybe other guys aren’t and vice versa. It’s a really good track. I really enjoyed playing it yesterday, and I think it’s going to be a wonderful test this week.”

McIlroy has tried to scout the course as best he could.

“I did a little video with Gil that they sent out there, so I watched that,” McIlroy said. “Then I think Golf Digest had like a few flyovers of the golf course, so just tried to get online. I tried to dig up some footage of last year’s Senior PGA, but it was pretty limited.”

Justin Thomas won the 2017 PGA Championship at Quail Hollow Club in North Carolina and is still searching for his second major crown. He paid his first visit to Southern Hills last week prior to playing the Byron Nelson in McKinney, Texas.

For Thomas, it was love at first sight.

“I thought as soon as I came here and I loved it as soon as I saw it,” Thomas said. “I just like the old school type of design and golf course. You know, tree-lined, big fall-offs and run-offs on the greens and the Bermuda grass makes it very difficult to chip. So, it puts a premium on having different techniques and different styles around the greens and also puts a premium on ball-striking to where you can hit the green where you have to chip less. I think this is an unbelievable major championship venue and I’m glad it’s here. It’s a sweet place.”

Four-time major winner Brooks Koepka is seeking his third PGA Championship, having previously won titles in 2018 and 2019 on the heels of winning U.S. Open crowns in 2017 and 2018.

“I’ve only played the front nine, so I can only speak there, but it’s not driver every hole,” Koepka said Tuesday. “I don’t think the course is overly long, but it’s definitely tough enough. It’ll test you – you’ve got to hit fairways out here. Whatever you can do to put the ball in the fairway to be able to control it going into these greens, because some of them are kind of undulating, and you’ve really got to place your ball in the correct spot because some of these downhill putts are quite quick. It’s interesting. I even look at the par- fifth (hole). Even if you hit driver it kind of bottlenecks, but you can’t get there even if you hit driver. There’s a couple holes like that where you just kind of lay up off the tee just to put it in the fairway.”

Collin Morikawa became a major winner at age 23 when he won the 2020 PGA Championship at TPC Harding Park. He quickly claimed his second major with a victory in the 2021 British Open at Royal St. George. His superb iron play makes him one of this week’s favorites because of the importance of well-placed approach shots on the undulating Southern Hills putting surfaces.

“Sometimes courses you’re going to have more short irons. This week I’ve felt like I’ve had kind of a range of irons, mainly on the mid to long iron side, especially on these par-3s out here. Hopefully those are firing at full cylinder and we’re able to hit some really good shots.”

Xander Schauffele played in the rain-shortened 2014 Trans-Mississippi Amateur at Southern Hills and had played each nine once prior to his interview session with media.

“It’s pretty obvious what needs to be done around the property,” said Schauffele, who is looking to win his first major. “It’s tough. It’s going to be really hard. I think PGA Championships for the most part, people feel like you can kind of shoot lower in them than most majors. But I think this year is going to be a different story.”

What is the biggest ask of the course? “There are a lot of asks, honestly,” Schauffele said. “You just have to play smart. They are going to be long rounds, not just because they are hitting over other greens and waiting, stuff like that. It’s going to be long just because you have to really think. You have to be smart. You can do the whole chip up, chip down, chip over, chip back off the front of the green type deal out here, especially with winds blowing 20 to 30 miles an hour which is what’s forecasted. It’s going to be a mental battle and you really have to stay patient. Sometimes hitting it to 50 feet is a good shot.”

Australia’s Cameron Smith, winner of this year’s The Players Championship, is experiencing Southern Hills for the first time. He played nine holes Monday afternoon and all 18 on Tuesday morning.

“I think the golf course is great,” said the 28-year-old Smith, who has quickly gained popularity among fans. “I think it’s going to be a really good test. I love the surrounds of the greens rolling off, same slopes of golf we play back in Australia. I like that grass around a little bit longer around the greens. I think some guys that aren’t really good around the greens get away with putting a lot, so I think that will test them way that week.”

The key elements this week? “I think the fairways are quite generous, but if you miss a fairway, it can be quite penal,” Smith said. “The rough, the ball is coming out super-hot, and I think the greens throughout the week will really firm up. So I think staying on the fairways and the greens have a lot of pitch to them, so just leaving yourself some nice uphillers I think would be good.”

Not only is Smith learning the course, he also is becoming acquainted with Southern Hills’ rich history. “Just walking through hallways and clubhouse here, it’s all very cool,” Smith said. “They have a very cool setup inside. I’ve been walking up and down the hallways reading some history. It’s good.”

Defending U.S. Open champ Jon Rahm, currently ranked No. 2 in the world, described Southern Hills as “a major championship-worthy golf course. It’s as simple as that.

“What we’ve been hearing from players, caddies, those in the golf industry and the fans has been overwhelmingly positive,” Cozby said. “I mean, this is reaction above what we had hoped for and it’s been very gratifying for all of us here at the club, for (superintendent) Russ (Myers) and his team and for (architect) Gil (Hanse). Now some of those opinions might change slightly tomorrow when the pencil gets put to the paper, but the reaction so far has been incredible, and that’s from all the top guys on down.”