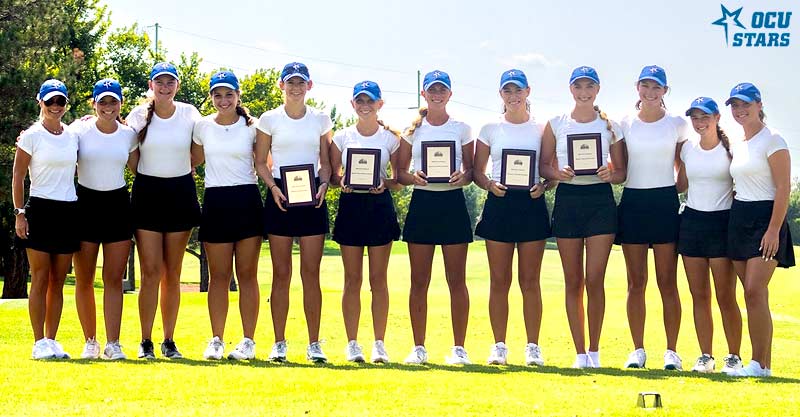 OKLAHOMA CITY – No. 1-ranked Oklahoma City University opened its season with a win in the Southwestern Christian Invitational at Lake Hefner Golf Course.

Stars took the first four spots and seven out of the first 10 spots individually. In the team standings, the Stars, top-ranked in the Women’s College Golf Association NAIA top 25, claimed No. 1 and No. 2 spots, going 20 shots under par with the OCU Blue team at 7 under.

The Stars’ Reagan Chaney captured the individual win by one shot over teammate Paige Wood. Chaney, a sophomore from Ardmore, Okla., owned the top score with a 67-69–136. Wood, a sophomore from McKinney, Texas, shot a 67-70–137. Chaney and Wood ended tied with 10 birdies each to lead the competition.

Morgan Palermo, a sophomore from Parker, Colo., ended with a 70-69–139 to take third. Fourth place went to Aubrey House, who carded a 70-70–140. House, a freshman from McAlester, Okla., provided six birdies.

Tied for sixth were Natalie Gough and freshman MaKayla Tyrrell. Both Gough and Tyrrell carded a 72-71–143. The only competitor among the top seven besides a Star was Cristina Galban from Southwestern Christian who finished with a 69-73–142.

The Stars’ next competition will be Sept. 12-13 at the Missouri State/Payne Stewart Memorial in Springfield, Mo.

Redlands Community College took fourth, led by Clara Peake in a tie for ninth after consecutive rounds of 73-73. Host Southwestern Christian finished sixth, led by the fifth-place finish of Cristina Galban at 2-under (69-73).