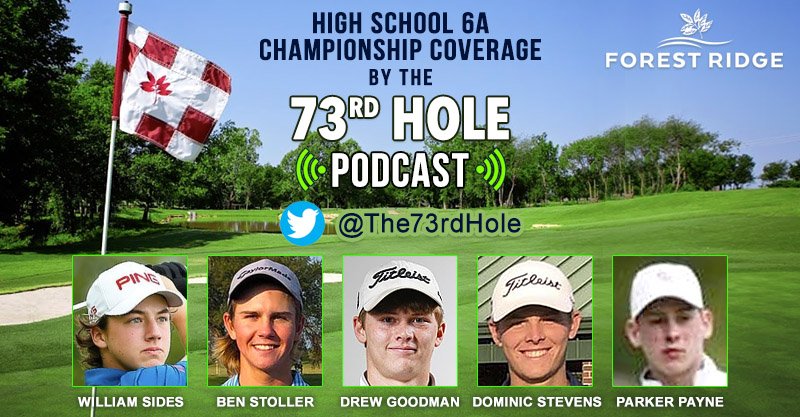 Scoring for all classes here

Some of the biggest names in high school golf, and some surprising newcomers, are in contention for state titles after the first 36 holes in five classes were contested Monday at venues around the state.

In Class 6A, defending champion from 2019 Jordan Wilson of trails Ben Stoller of Owasso by a shot at Forest Ridge Golf Club in Broken Arrow. Stoller helped Owasso unseat Edmond North as champion with a late birdie in 2019, but North is running away with the team title, leading by 14 shots over Jenks.

Fans can watch many of the key shots from today’s final round as the 73rd Hole Podcast team will be shooting video and immediately posting on Twitter. Follow @The73rdHole to see some of Oklahoma’s great young stars navigate one of the top public courses in the state.

Stoller is 4-under heading into the final round while Wilson is at 3-under. Dylan Teeter of Bixby is 1-under and Mesa Falleur of Muskogee is even-par.

In Class 5A at Meadowbrook Country Club in Tulsa, freshman Parker Payne of Noble shot a second-round 66 to grab a five-shot lead over favored Will Hennesee of Bishop Kelley. Just a freshman as well, Hennessee is one of the top recruited prospects in the state. Payne is at 8-under 136, with Hennessee at 3-under 141. Bishop Kelley leads the team race by 13 shots over Duncan.

In Class 4A at Winter Creek Golf Course in Blanchard, William Sides of Cascia Hall shot consecutive rounds of 68 to grab a 2-shot ead over Tres Hill of Elk City. Cascia Hall leads Elk City by two shots in the team race.

In Class 2A at Earlywine Park in Oklahoma City, Dominic Stevens of Crescent blazed his way to consecutive rounds of 65 for a 13-shot lead over Conner Cryer of Tipton. Walters has a 24-shot lead in the team race.