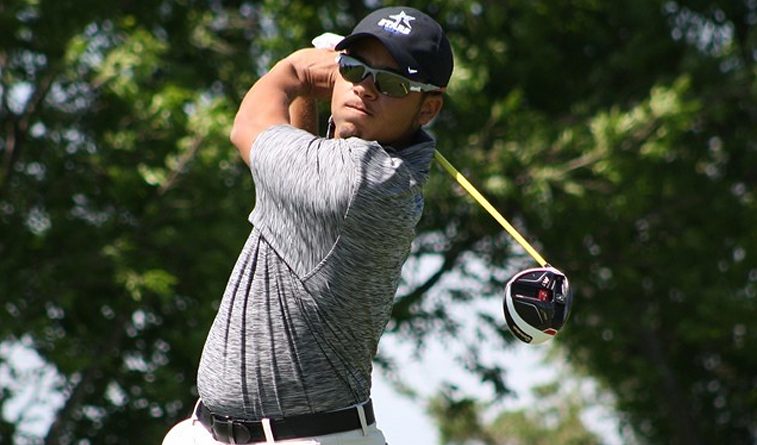 Photo: Peri’Don Castille knocked in three birdies during the third round Thursday.

SILVIS, Ill. – Rupert Kaminski of Oklahoma City University enters the final round of the NAIA men’s golf championships eight strokes off the pace after the second and third rounds Thursday at TPC Deere Run.

Kaminski, a sophomore from Johannesburg, South Africa, has accumulated a 71-77-73–221. The No. 1-ranked Stars hold seventh place in the team standings.

Through 54 holes, Kaminski has drained eight birdies. Kaminski buried four birdies on the first, second, 11th and 15th holes during the third round. No. 2 is a par-5, 540-yard hole. Kaminski seeks his second NAIA Championships all-tournament accolade. Rowan Lester of Texas Wesleyan has the individual lead with a 69-72-72–213.

The Stars’ Matthew Cheung has produced a 78-79-71–228. Cheung, a senior from Brisbane, Queensland, Australia, has piled up nine birdies, including four during the third round. David Meyers of OCU has turned in a 74-79-76–229. Meyers, a freshman from Johannesburg, South Africa, has nailed seven birdies.

Peri’Don Castille has provided Oklahoma City with an 83-77-72. Castille, a freshman from Dallas, has six birdies. Garrison Mendoza, a junior from Clinton, Okla., added an 84-85-74–243 plus five birdies.

Inclement weather forced the postponement of Wednesday’s second round. With potential weather issues looming Friday, the tournament was cut to the top 17 teams and 40 individuals plus ties after the completion of the second round Thursday morning.
The last 18 holes of the NAIA Championships starts 7 a.m. CDT Friday.