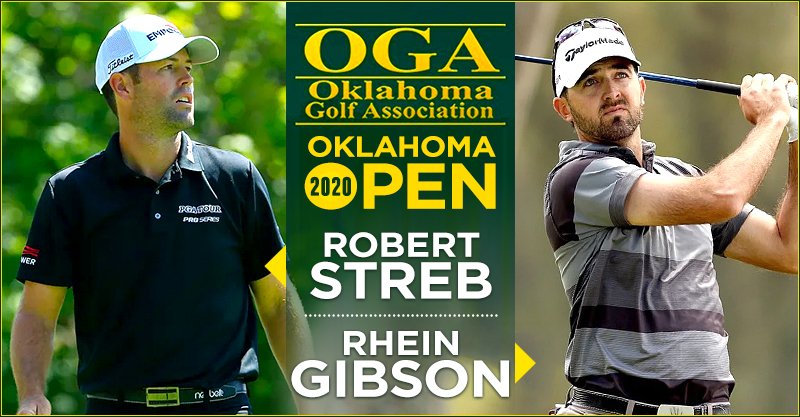 Golf has had many benefits in this most unusual year and here’s another. The strength of field in this week’s Oklahoma Open is as strong as it’s been in decades.

PGA Tour regulars and past Oklahoma Open champions Robert Streb and Rhein Gibson are both in the field for the state open which begins Thursday and goes through Saturday at Oak Tree Country Club on the East Course.

Streb and Gibson had a final chance this past weekend to move into the top 125 on the money list and qualify for the Fed-Ex Cup playoffs but both missed the cut at the Wyndham Championship. Both had previously entered the Oklahoma Open in the event they did not make the playoffs. Due to the circumstances this year with the Covid-19 pandemic, those two will retain their PGA Tour cards for the 2020-21 season but are facing an extended break during the playoffs.

Streb, who played his high school golf at Edmond North, won the Open in 2009 and 2011 while Gibson won in 2010, causing him to remark that he was the filling in a Streb sandwich.

“I’m just so proud that both those guys would come back and play in this event,” said OGA Executive Director Mark Felder. “Obviously they can make more for finishing last in most tour events than they can for winning this, but they wanted to help us and come spend a week with their families.”

Gibson, who famously shot a national record 55 at River Oaks Country Club in Edmond and played at Oklahoma Christian, is a member at Oak Tree National. Streb, who went on to play at Kansas State and now lives with his wife and two children near Kansas City, still has family in Oklahoma.

Streb will tee off at 12:30 p.m. Thursday in a group with Phillip Bryan and Bill Alcorn. Gibson goes at 1 p.m. with Brendon Jelley of Jenks, currently playing well on the All Pro Tour, and two-time OGA Mid-Amateur champion Kyle Hudelson.

Another feature pairing is at 12:40 with Oklahoma Golf Hall of Fame member Gil Morgan paired with Britt Pavelonis and University of Oklahoma freshman Jaxon Dowell of Edmond, one of Oklahoma’s top junior amateurs.

Felder said Dowell had planned to drop out of the event to attend start-of-school activities in Norman but changed his mind once he learned of  the pairing with Morgan, the 25-time winner on the Champions Tour and seven-time winner on the PGA Tour and one of the game’s true gentlemen.

“This is a great opportunity for Jaxon to be around two of the game’s great players and see how they carry themselves and learn some things that will benefit him throughout his career,” Felder said.

Morgan won the Oklahoma Open in 1981 and 1997 and has always been a staunch supporter and believer that having your name on your state’s open championship is a high honor.

Many of the recent winners are now competing on the PGA Tour (Josh Creel, 2015) or the Korn Ferry Tour (Max McGreevy 2017 and 2019) and Robby Ormand (2014), the 2018 champion Casey Fernandez is in the field, making four past champions along with Streb, Gibson and Morgan.