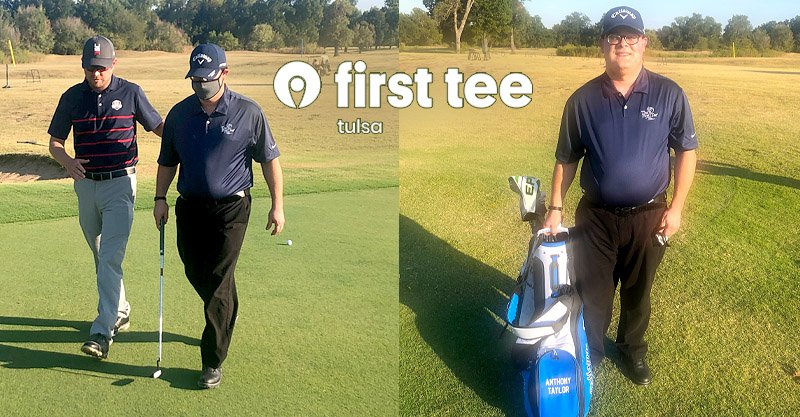 Anthony Taylor shot a 39 recently on the old front nine of Pecan Valley at Mohawk Park. It was his personal best and a pretty good score for anyone on the nine holes used frequently by the First Tee of Tulsa students, with several holes that will give most golfers fits.

Now consider a few factors. First, Anthony is legally blind. He plays all shots by touch and feel, going off the directions of his instructor and partner Austin Quinten, the programming director at First Tee of Tulsa, where Anthony has been a devoted student for the past 15 years.

Yes, 15 years. Anthony is 30 and in the special needs class at First Tee of Tulsa. More importantly, he is gearing up for the Special Olympics National Golf Championship next June 5-12 at Orange County National Golf Center in Winter Garden, Fla. He and Quinten have qualified and raised the money to play in the 72-hole alternate shot national championship for Special Olympians. Anthony teamed with First Tee of Tulsa Executive Director Janice Gibson in events when he first became interested in competing, but matched up with Quinten six years ago when Gibson was nursing a shoulder injury. The pair has been inseparable since. As well as undefeated.

The relationship only deepened when Anthony’s father David Taylor was killed four years ago in an auto accident.

“He was a youth pastor and just the nicest guy you could meet,” Quinten said. “At that point as a First Tee employee and a friend, I stepped up and took on more of a role with Anthony. Now he’s like a brother and Marilyn is like a second mother. They are just good people and will do anything for you at the drop of a hat.”

Although legally blind, Anthony has enough peripheral vision to see a ball on the ground in front of him. Outside of 5 feet, everything is a blur. He and Quinten have worked out a system for lining up full shots and putts and Austin is his eyes on the course, describing the intervening terrain, the firmness and slope of the greens, and working with him on everything from swing mechanics to distance control and ball flight.

Anthony has come a long ways from when they first met, when he would hit every tee shot with a 7-iron.

“When I’m hitting, it’s all feel for me basically,” Anthony said. “I have pretty soft hands and can usually tell if it’s a good shot or bad, if it’s going left or right. When I get too close to the ball I tend to top it.”

We watched Anthony practice his putting, short irons and driving and he has a good swing with a nice follow through. On his drives, the vision issues bother him the most since he is farther from the ball and he tends to hold on, creating a bit of a left- to-right issue. But nothing Austin can’t handle in their alternate shot matches.

As mentioned, the two are undefeated and Anthony has 15 gold medals to prove it. They will compete in several area tournaments and the state championship before going to Florida, but their spot in the nationals is assured and both are excited for the opportunity.

“In those six years we’ve never lost but those are mostly nine-hole formats,” Austin said. “To get your name in this hat you have to perform and that’s how we got invited. We have to represent Oklahoma well. The good news is Anthony always has a positive attitude. He never gets down, never talks negative. He’s always looking for the next shot to hit. He’s a good walk. We have really good conversations and make each other laugh.”

Anthony, who has been working out three times a week in a gym in Chouteau, lives a responsible life, working at McDonald’s to pay for his own clubs and clothes and help with bills at the house. Mother Marilyn said the First Tee program has been a lifesaver and credits Gibson and Quentin for helping Anthony overcome a traumatic early childhood.

Before coming to live with the Taylors at age 11, Anthony was abandoned by his birth parents and had several less than ideal experiences at a foster home. When he says his favorite part of golf is “the peacefulness” it has worlds of meaning beyond the tranquil setting of a course.

“He could tell you some unpleasant things in his past and there’s not too many people that would have adopted a legally blind kid with learning disabilities,” Austin said. “But Marilyn opened her heart to him and the rest is history. That’s who Marilyn and David are and I couldn’t be more happy to be associated with them.

“The fact that Anthony has come out on the other end with so much positivity and happiness in his life is astounding.”