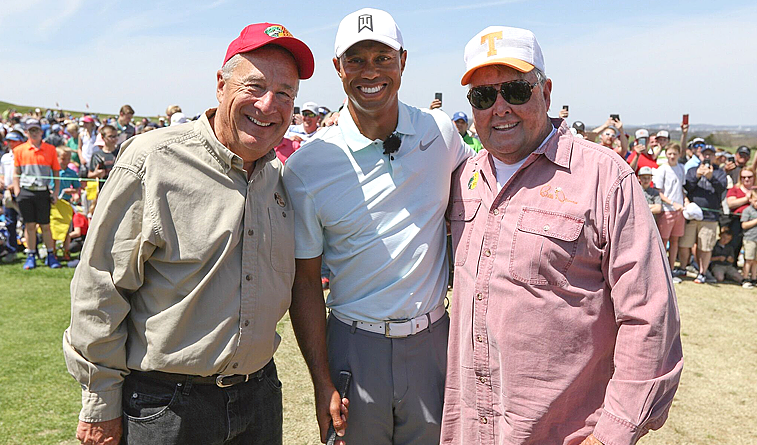 Tiger Woods drew thousands of young golfers and their parents to a clinic on the driving range at the Buffalo Ridge Golf Course in Hollister, Mo., part of the festivities for the Bass Pro Legends of Golf tournament which begins Thursday. Tickets are available at the gate or at www.bassprolegends.com.

The tournament will incorporate the new Mountain Top course designed by Gary Player for the first time as well as the Top of the Rock course by Jack Nicklaus and Tom Fazio’s Buffalo Ridge. Woods has designed a course (Payne’s Valley) for Big Cedar and Bass Pro owner Johnny Morris that is being built and will open in 2019 and be the first public course he has designed.

In last year’s final round, Carlos Franco and Vijay Singh turned a seven-shot deficit into a one-shot victory after they carded a tournament-record score of 12-under 42 at Top of the Rock. Their 36-hole total of 15-under 93 was one shot better than three teams: first-round leaders Fred Funk / Jeff Sluman, Corey Pavin / Duffy Waldorf, and Paul Goydos / Kevin Sutherland. For Franco, it was his second career victory and first since he won the 2016 Shaw Charity Classic, while it was the first PGA TOUR Champions win for Singh. Should Franco and Singh win again, they would be the first team to successfully defend their title since Jim Colbert and Andy North won in 2000 and 2001.