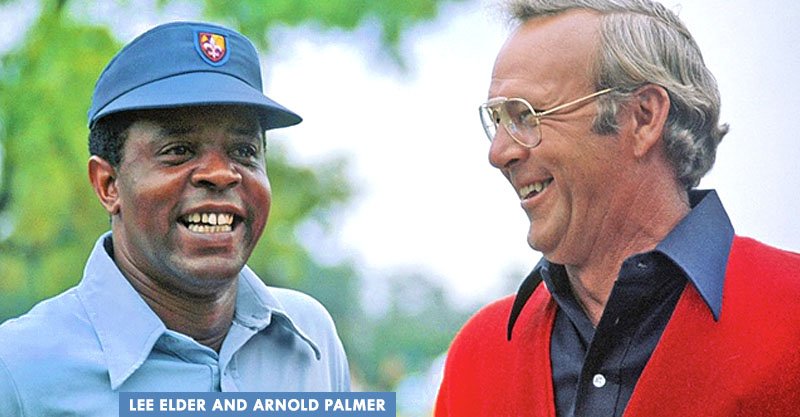 At the end of each year, it’s fun to look back and reflect on the stories that attracted our attention. Some are obviously significant and maybe set a pathway for the future of our game and a few are merely interesting.

Lee Elder—Dead at Age 87
Lee Elder was a true pioneer. He was a professional golfer, a multiple winner, first African American to play in the Masters and first to play for the United States in the Ryder Cup. Despite overt racism plus hate mail and threats on and off the course he maintained a professional demeanor while playing at the highest level and set an example for all of us.

Tiger Woods–End of the Era?
An automobile accident in February caused a major leg injury sidelining Woods for the entire year and was followed by the announcement even though he was recovering his days of being a fulltime tournament golfer were over. He expects to play in selected events with the first being the PNC Championship with son Charlie.

Ryder Cup Rout—Has the Tide Turned?
Captain Steve Stricker couldn’t get rid of the smile as his U.S. team routed the European Team 19 to 9 for the second win in the past three Ryder Cups, both being on home soil. This streak, if it can be called that, will be put to the test in Rome at the 44th Cup. The last time the U.S. triumphed in Europe in 1992 at The Belfry in England.

Women in Golf—A Force to be Reckoned With
The effects of the pandemic included more people being attracted to the game with women and juniors making up a major component of the new players. The National Golf Foundation says 40% of new golfers on and off the course are women and Golf Datatech quantified their impact reporting their purchases of golf equipment and apparel will be more than $1.53 billion this year.

Premier Golf League—Well Funded Competition
Greg Norman’s quest for a world tour dates to the early nineties and it appears he’s about to fulfill it with the Premier Golf League backed by Saudi Arabian investors. Few details are available but elite players are being courted and ultimately some kind of team play is likely. The competition pushed the PGA Tour to increase total purses for next season by $60 million plus $35 million in additional player incentives.

Whan Takes Over at USGA—Future Relevancy at Stake
Michael Whan achieved much greater success than any previous commissioner of the LPGA, but this year jumped over to become the CEO of the United States Golf Association replacing Mike Davis. He needs to solve several important controversies including Davis’ assumption the ball goes too far. As I wrote at the time of the appointment Whan has his job cut out for him, “The relevancy of the USGA is at stake and for the good of the game needs to be improved.”

PGA Merchandise Show—Virtually Not the Same
The largest and most important meeting of the golf industry is held annually in Orlando with over 40,000 in attendance but in 2021 the Show was done via smartphones and computer screens. The “virtual” Show was not an overwhelming success and raised questions about the future and if it can fulfill its primary mission of continuing education for PGA Professionals while revitalizing its status of the must-be-there relationship building event.

Mickelson Wins PGA—What Will Lefty Do Next?
A month shy of his 51st birthday Phil Mickelson won his sixth major, the PGA Championship, and his 45th PGA Tour win becoming the oldest player ever to win a major. Lefty also took home four PGA Champions Tour trophies in six starts on the senior circuit so is it time to start talking about him in the same terms as the ageless Sam Snead?

Annika Wins Senior Women’s Open—A Classy Victory for a Classy Lady
Not to be out done by Mickelson, Annika Sorenstam came out of retirement to win the U.S. Women’s Senior Open at the age of 50 causing a rousing cheer across the golf spectrum. Always a fan favorite Sorenstam all but lapped the field with an eight-stroke victory over runner-up Liselotte Neumann over the classic Brooklawn Country Club layout.

U.S. Open—Even Better Than Ballesteros
Jon Rahm closed with birdies on the final two holes for a one stroke victory in the U.S. Open, his first major and became the first Spanish native to win our national championship. His final round of 67 over the difficult Torrey Pines South Course tied the low round of the day and firmly established the affable Spaniard at the top of the World Golf Rankings.

LPGA Names Commissioner–Whan a Tough Act to Follow
Mollie Marcoux Samaan took over the LPGA top spot from Michael Whan and has big shoes to fill. Whan’s 11-year tenure saw prize money increase 80% and the LPGA-USGA Girls Golf Program increasing participants from 5,000 to 90,000. So far, the new commissioner has stressed more worldwide publicity for LPGA players and growing women’s participation in the game.

Amateur Status Rules—A Modernization
Bowing to the “how-things-are” in the world the USGA has changed the Rules of Amateur Status, dovetailing with the relaxation of NCAA regulations. Effective Jan. 1, 2022, amateurs will be within the Rules to accept payments for travel or use of their name in commercial ventures. This immense shift does away with the reason Bobby Jones, the greatest amateur of all time, after winning the Grand Slam sent a letter to the USGA renouncing his amateur status so he could make instructional films.

Golf Growth—Good for Everyone
When final numbers are in for rounds played and the number of golfers, they will both show continued increases this year on top of the gains in 2020. Pandemic-driven golfers and newbies alike found golf to be a remedy to cabin fever and in 2020 36.9 million either played golf (24.8 million) or visited a golf entertainment center (12.1 million). According to preliminary estimates from the National Golf Foundation 2021 will have even higher participation. And it’s not just golf courses enjoying a boom; equipment retailers and manufacturers led by Callaway and Acushnet are having a record year.

PGA Tour-Return to Normal?
The 2020-2021 season included a few players and caddies testing positive for Covid-19 but recovery from the pandemic resulted in essentially no restrictions on fans or competitors. The record books will show two Masters tournaments being played but that will be quickly forgotten as we all try to put the disruptive effects of the pandemic in the rearview mirror.