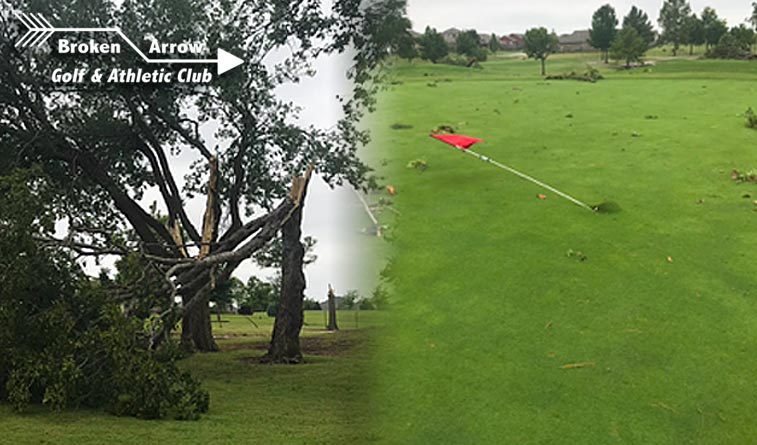 Just a few hundred yards separated an EF1 tornado from the clubhouse at Broken Arrow Golf & Athletic Club, according to Allen Anderson, who works in the pro shop there.

“We lost 40 trees because of the tornado,” Anderson said. “The actual funnel touched down around the 15th hole and went across the golf course toward the fifth hole, which is about a mile away.”

The tornado was part of the same storm which dropped a tornado in Tulsa near 41st Street and Sheridan Road, causing heavy damage to structures and sending 25 people to hospitals. The tornado packed winds between 90-100 miles per hour.

The course will be closed for the next three days as fallen trees are cleaned up and turf damages can be repaired. The club didn’t suffer structural damage to any buildings as the twister stayed primarily on the course before lifting.

Saturday’s storm brought torrential rain to many courses in northeastern Oklahoma. LaFortune Park’s back nine opened Monday after flooding made it unplayable and White Hawk Golf Course in Bixby was closed all day Sunday due to flooding. Forest Ridge in Broken Arrow opened at 10 a.m. Sunday but had huge puddles in several fairways.

Other courses in Broken Arrow reported only minor damage, if any, such as a few fallen tree limbs and flooded bunkers.