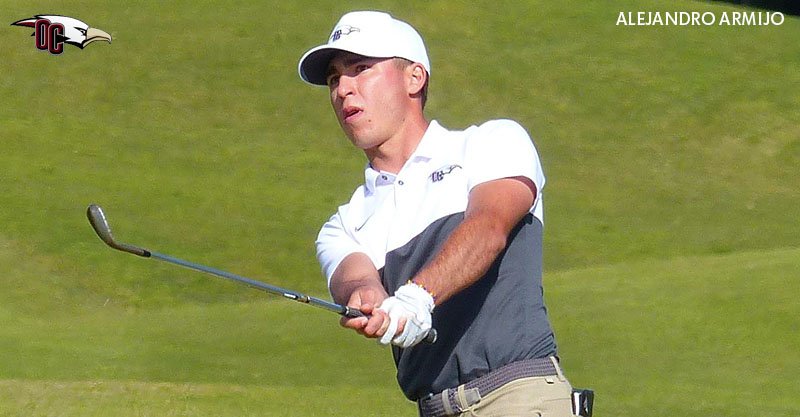 DuPONT, Wash. (May 8, 2021) – Oklahoma Christian’s final round in the NCAA Division II South Central-West Super Regional at The Home Course on Saturday afternoon didn’t go how the Eagles had envisioned.

OC, which led the 16-team tournament after Friday’s second round, needed a top-four finish to secure a trip to the NCAA Division II Championship later this month, but the Eagles instead gradually slid down the standings and weren’t able to rally at the end, placing sixth and ending their season.

The Eagles’ final-round score of 301 gave them a three-round total of 884, just two shots behind fourth-place Colorado State-Pueblo. Texas A&M-Commerce rallied to win the tournament, using a final-round score of 288 (even par) to close at 874. Host Saint Martin’s (Wash.) and Sonoma State (Calif.) also advanced with scores of 878 and 880, respectively, with Montana State-Billings fifth at 883.

It was the first time since September, when the Eagles placed fifth in the Brickyard Invitational in Speedway, Ind., that they’d finished lower than second in any tournament against Division II competition. Since then, they’d been beaten by only one Division II opponent entering the Super Regional, which they entered coming off a win in the Lone Star Conference Championship in Arlington, Texas.

On Saturday, OC recorded only two birdies over the first 15 holes on the 7,047-yard course, opening the door for its opponents. The Eagles still were in fourth place, five shots clear of fifth, midway through the round and remained in a three-way tie for fourth with Colorado State-Pueblo and Montana State-Billings after 12 holes.

The Eagles needed to play the final three holes at 3-under as a team to make a playoff, but despite a three birdies in that stretch, finished them in a combined 1-under.

OC senior Trevor Norby of Carlsbad, Calif. – selected earlier in the week to represent the U.S. team in the prestigious Palmer Cup – closed his brilliant collegiate career with another top-10 finish, tying for ninth in the 86-man field at 217 (1-over) after a 2-over-par 74. It was his ninth top-10 finish in 10 tournaments this season.

Freshman Mateo Pulcini of Rio Cuarto, Argentina, also finished in the top 20 individually, tying for 15th at 221 following a 78 on Saturday. Junior Alex Motes of Sulphur Springs, Texas, fired a 79 and tied for 32nd at 224.