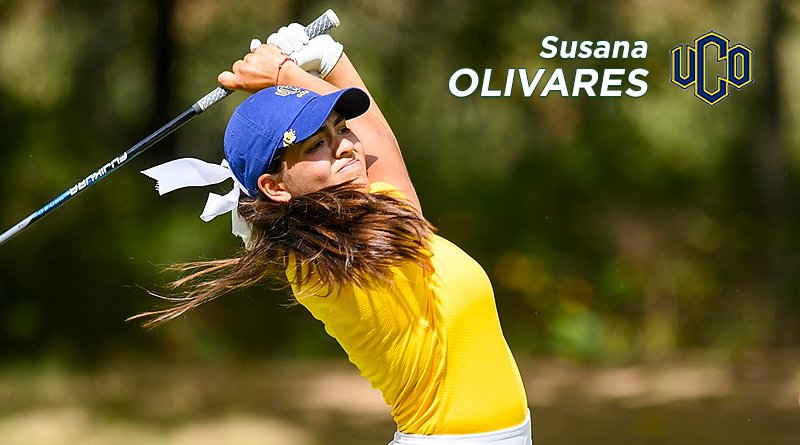 CORAL SPRINGS, Fla. – The Women’s Golf Coaches Association announced Tuesday its 2019-20 All-American teams and University of Central Oklahoma freshman standout Susana Olivares was named to the list, becoming the sixth All-American in UCO golf history since the program started in 2003.

“I’m really proud of Susana,” UCO head women’s golf coach Michael Bond said. “She came in as a freshman and made an immediate impact for our team and she was a great teammate right away. She deserves this and I’m really happy for her.”

Olivares, from Guadalajara Jalisco, Mexico, wasted no time upon arrival at Central to make an impact. The freshman played in seven tournaments this season, which was of course cut short due to the global health crisis, averaging a 72.86. She had a low round of 68, firing a 3-under-par in the second round of the UCO Classic in September and propelling herself to medalist honors and the Bronchos to a team victory.

She followed her first career victory in Edmond with another in Warrensburg, Mo. the following week, and again, fired a second round in the 60s. She shot a 1-under 69 to win the tourney and lead UCO to a second-place team showing.

Olivares finished fourth and 10th in her first two collegiate tournaments before taking over in the month of October. She won the UCO Classic and the UCM Classic in back-to-back weeks. She finished second in the Arkansas Tech Invitational later that month. Olivares would also finish second in the final tournament of the season, Southern Nazarene’s Diffee Ford Lincoln Classic. She had a pair of fourth-place showings as well to finish fourth or better in six of seven tourneys.

Central Oklahoma finished in the top eight in all seven tournaments and in the top four in all but one tourney. UCO finished second three times and won once, taking the UCO Classic at the Golf Club of Edmond.