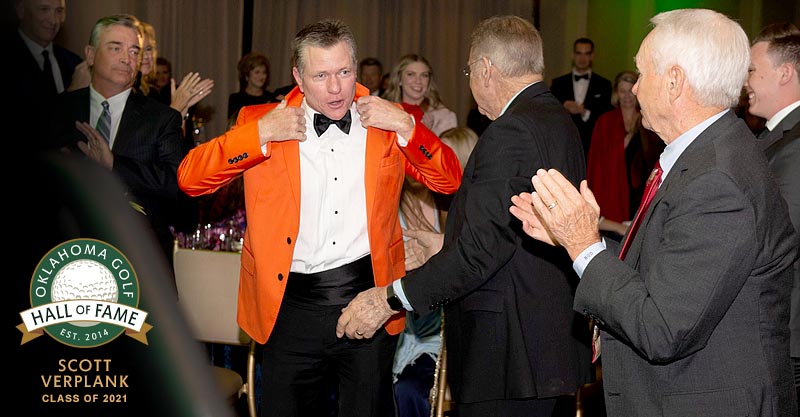 Verplank, one of the greatest golfers in the proud history of Oklahoma State, changed into an orange jacket on his way to the stage to give his acceptance remarks.

Here is his induction video.

Here are are the videos for Floyd Farley,  David Edwards, Danny Edwards and Art Proctor.

On a night when three former OSU All-Americans were inducted, it was fitting that Oklahoma State graduate Talor Gooch broke through for his first PGA Tour victory, the second Cowboy to win a tournament in the last three weeks with Viktor Hovland winning two weeks back and Kevin Tway tying for second last week

Verplank was one of the few golfers to win a PGA Tour event (the 1985 Western Open) before winning the NCAA Championship, which he did for Oklahoma State in 1986, Verplank has walked the summit of the golf world but also had to fight his way out of some deep valleys.

A Type 1 diabetic, Verplank long played with a pump to control his blood sugar level. He has battled numerous other wrist, elbow and shoulder injuries and lost the entire 1997 season after elbow surgery in 1996.

Verplank was a mainstay of the “Oak Tree Gang” playing out of Oak Tree National in Edmond. He still plays on the Champions Tour but is also getting into broadcasting and has a contract with CBS.

When the Edwards family first moved from Wichita Falls to Edmond, Kickingbird had yet to open. Danny hit balls in a field, and often secretively, on the still growing-in course while no one was watching. Somehow he became proficient enough to win the state championship for Edmond and earn a scholarship to Oklahoma State.

In addition to the victories at OSU, Danny’s amateur career included a stint on the 1973 Walker Cup Team. He was low amateur the same summer at The Open Championship. He won the 1972 North and South Amateur and the 1972 Southeastern Amateur.

Although he played briefly on the Champions Tour, Danny was consumed with other opportunities. He was an original founder of Royal Grip, later successfully sold to investors. He became a highly proficient professional auto racer and was heavily involved with divot repair company (Green Fix Golf). He has recorded a series of videos teaching proper chipping methods.

“David was one of the most driven players we’ve ever had at Oklahoma State,” said former teammate Tom Jones. “He wasn’t the best player when he got here but he was when he left.”

David, who did get to practice and play at the now-opened Kickingbird, went to OSU in 1974, where he averaged 77.6 shots per round as a freshman, lowering that to 71.8 as a senior when he won two events, finished second or third in five others and capped off his dominating year by winning the 1978 NCAA Individual Championship and leading the Cowboys to the team championship.

He didn’t take long as a professional to break into the win column, claiming the 1980 Walt Disney World National Team Championship with brother Danny, then winning the 1984 Los Angeles Open, the 1992 Memorial Tournament and the 1993 MCI Heritage Golf Classic. He also won the 2006 3M Championship on the Cham- pions Tour and was a two-time winner of the Oklahoma Open (1994 and 1996).

More photos, videos and scenes from the evening will be coming soon.