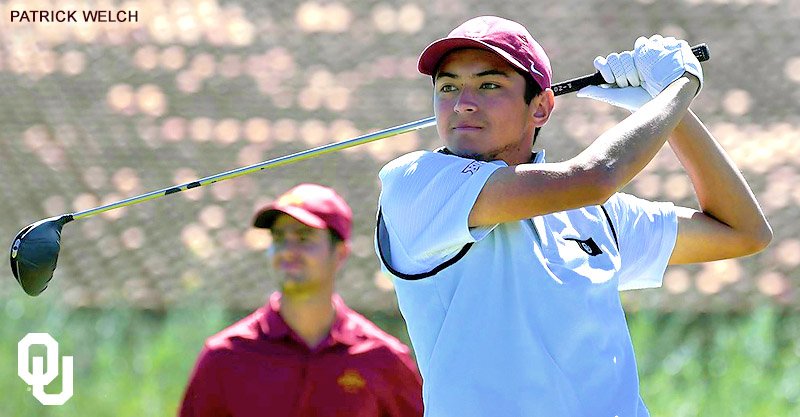 Welch’s round, paired with low scores from Chris Gotterup and Logan McAllister, has the top-ranked Sooners in the hunt for another team title as RyanHybl’s squad sits alone in second after posting a 268 (-20), three shots back of No. 12 Georgia. If Welch can go wire-to-wire and win, he’ll receive an invite to the PGA Tour’s Puerto Rico Open, held at Grand Reserve March 3-6.

“I’m really proud and excited for Patrick and his 62 today,” Hybl said. “It was a beautiful round of golf. We did some really good things today, including Chris (Gotterup) and Logan’s (McAllister) finishes to their rounds.”

Welch’s opening-round score of 62 matched Quade Cummins and Blaine Hale atop the school’s annals for all-time lowest round. But the senior’s eagle on 18 sent him to 10-under on the day, surpassing five other Sooners who had posted a 9-under in their career to claim the school record vs. par at 10-under. The five Sooners that Welch passed Sunday include Cummins, Max McGreevy, Grant Hirschman, Abraham Ancer and Will Kropp.

“Everything went really well today,” Welch said. “I hit the ball really well, which set me up with a lot of birdie chances and I converted on most of them. I didn’t have too many mistakes today, which obviously helps. To be mentioned with guys like Quade and Blaine and those other OU guys is really cool, because I played with Quade and Blaine my freshman year and I really looked up to them and tried to get to their level of play. I don’t think you ever go out there and try and set a record, it just happens naturally, and fortunately for me I had everything clicking for me today.”

While the senior All-American stole the individual show at Grand Reserve, the Sooners had themselves one of the best team rounds in school history, finishing at 268 (-20). The overall score of 268 marks the fifth-lowest single-round score all-time for the Sooners, and the 20-under vs. par has only been bested three times.

The All-American duo of McAllister and Gotterup finished in the red as the two combined to close 6-under across the final three holes. Gotterup, the top-ranked player in college golf, fired a 66 (-6), and McAllister posted an eagle and birdie on 17 and 18 to finish with a 69 (-3). Gotterup enters day two in a tie for fifth as he hunts his fourth consecutive top-three finish and McAllister owns a piece of 22nd.

Redshirt freshman Stephen Campbell was the fourth Sooner to sign for a red number, collecting five birdies for a 71 (-1) and a share of 48th. Freshman Drew Goodman led the team with 14 pars and closed the opening round in a tie for 60th at even-par.

Playing as unattached individuals, Jaxon Dowell and Ben Lorenz find themselves in the mix after 18 holes. Dowell (T22, -3) tallied seven birdies on the day, but a double-bogey No. 8 and two other bogeys pushed him to 69 on the day. Lorenz carded four birdies and a pair of bogeys to fire a 70 (-2).

The Sooners, who entered the spring as the No. 1 team in college golf, seek their third win of the season and are in line for their 13th consecutive top-three team finish in regular-season tournaments.