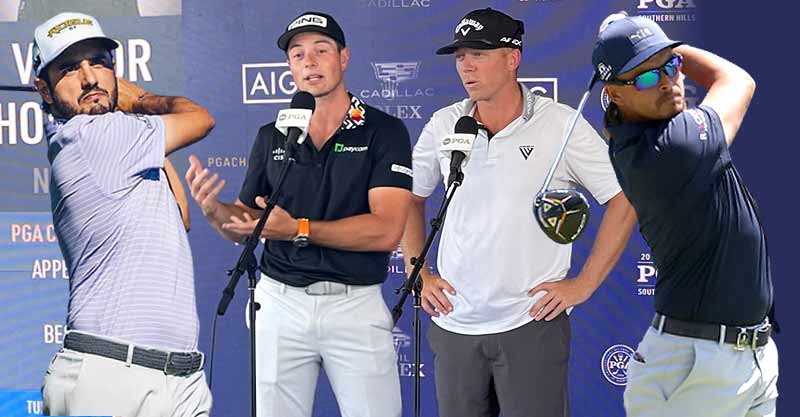 It was a bit of Bedlam in the PGA Championship interview tent Monday afternoon, as three Cowboys and a Sooner took turns describing what playing a major championship in Oklahoma means to them and how ready they are for the challenge they will encounter at Southern Hills.

Cowboys Viktor Hovland and Talor Gooch and Sooner Abraham Ancer are brimming with confidence and ready to rally to as many Go Pokes and Boomer Sooner cries as the thousands of fans of both schools on hands can belt out.

Rickie Fowler, on the other hand, is trying diligently to extract himself from a baffling slump. He would not be eligible for the championship based on his world ranking or play from last year’s PGA Championship to now, but is in because he finished in the top 15 at Kiawah Island in 2021.

Fowler, however, remains as upbeat, polite and accommodating as ever as he tries to puzzle out his swing issues.

“Going through it, it’s never fun. But I’ve actually enjoyed it as much as it has sucked,” Fowler said. “I’ve definitely found myself, not that I ever fell out of love with the game, but I’ve embraced the grind and the aspect of just taking every day and going out and enjoying it, even though we have been in some tough spots.

Fowler said some things have clicked lately, but the road back to being one of the top players is taking far longer than he had hoped. Meanwhile Hovland has rocketed up to No. 6 in the Official World Golf Rankings, while Ancer is 24th and Gooch is 35th.   Fowler has plummeted to 146.

Gooch, the only native Oklahoman in the field, called it a dream come true to be playing a major in his home state.

“Where do I even start,” he said. “To be the only Oklahoma born player, we know the tip of the mountain, to get here is not easy. I don’t take any of it for granted because I’ve seen so many kids that were good throughout the years that haven’t gotten to this point. As humbly put as possible, I’m just grateful that I’m here”

Even though he missed the cut in the Byron Nelson last week, Gooch said his game is in good shape coming into the week, a statement echoed by both Hovland and Ancer.

Hovland, who led the Cowboys to the 2018 NCAA Championship, has been off for all but one week since The Masters. He’s been over on four separate occasions to practice at Southern Hills even prior to this week and is obviously pointing toward this week. He said the time off, most of it spent practicing with the Cowboys at Karsten Creek, has been productive.

Ancer, the only Sooner in the field, helped coach Ryan Hybl kick start what has turned into one of the nation’s elite golf programs when he transferred to OU from Odessa Junior College and played three seasons from 2010-13, leaving with what was then the second lowest scoring average in Sooner history at  72.42, behind only Anthony Kim. The native of Mexico looks back fondly at his time in Norman and said playing a major at Southern Hills is like a home tournament.

“It feels like my second home really,” he said. “Just in the practice round, there are so many Sooners out her that it feels really nice. Obviously you’ve got the Pokes out there making sure they’re there. But it’s always nice to play in Oklahoma. That’s always what stood out to me when I got to Norman, just how welcoming and supportive everybody really is.”

He will be keeping an eye on how the Sooners are faring in the NCAA Regional going on through Wednesday at Jimmie Austin, and wishes he could spend some time with the team while in town.

“I text with Hybl pretty regularly. He’s always pushing me and encouraging me and just keeping me updated. I was thinking about stopping by, but I’ve got to learn this golf course. It’s going to be a long and tough week, but I’m wishing them all the best. I’m sure they’re going to do very well.”

It would be nice if the Sooner and all three Pokes do very well this week.