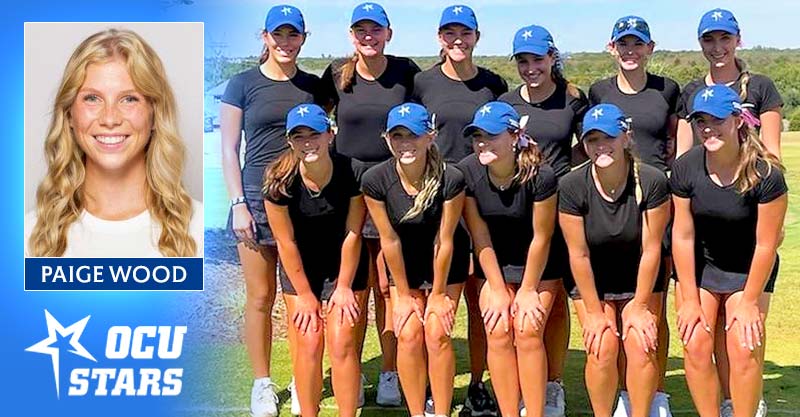 EDMOND, Okla. – Taking three of the top four spots including a vicory by Paige Wood, Oklahoma City University rolled to a 27-shot victory over host Central Oklahoma in the Grace Shin Invitational on Tuesday at the Golf Club of Edmond.

The Stars, ranked No. 1 in the NAIA according to the Women’s Golf Coaches Association, conclude the fall season with three wins in four events. OCU’s Paige Wood took her second career win.

Wood, a sophomore from McKinney, Texas, became the only player in the field at even par. Wood delivered a 71-71–142, finishing with five birdies and one of two eagles in the tournament. Wood came up with birdies on two of her last four holes.

On her next to last hole, Wood drained a 35-foot downhill putt with four feet of break on No. 18. She recovered after pulling her tee shot on the 18th hole. Wood secured the win by making par on No. 1. Wood previously won the Las Vegas Shootout on Feb. 21-22 in Boulder City, Nev.

Kamas produced a 70-74–144. Kamas, a sophomore from Kingfisher, Okla., nailed eight birdies to lead the tournament. Gough forged a 70-77–147. Gough, a senior from Bixby, Okla., knocked in six birdies Monday and Tuesday.

Four golfers in OCU’s lineup finished among the top 10. Morgan Palermo, a sophomore from Parker, Colo., turned in a 73-78–151 while sinking four birdies and tying for ninth place. MaKayla Tyrrell, a freshman from Southlake, Texas, contributed a 78-74–152, which tied for 13th. Tyrrell made four birdies.

Central Oklahoma shot a 303 on Tuesday, following up its 304 from Monday’s first round. Jirasuda Khunarak and Madison O’Dell led the Bronchos, with both posting scores of 150 for the tournament. They tied for fifth place in the individual standings.

Emma Shelley tied for 18th place four shots back with a 154. Mika Ramos was Central’s fourth score with a 157.

Arin Zachary shot a 158 for the tournament and Nanya Hinsui, who competed individually, posted a 163.

Khunarak followed Monday’s 7-over 78 with a 1-over 72 on Tuesday. The junior from Thailand played the front nine even par. She birdied the par-4 fifth hole before bogeying No. 8. Khunrak played the back nine 1-over. She hit 15 pars on Tuesday’s final round.

Shelley followed Monday’s 78 with a 76 on Tuesday that included a pair of birdies. Ramos posted rounds of 79 and 78 and had one birdie on Tuesday. Zachary shot a 75 on Monday before posting 83 on Tuesday. Hinsui improved from her 86 on Monday with a 77 on Tuesday.

Central Oklahoma will wrap up its four tournaments in four weeks stretch next week with the National Preview in Eureka, Missouri.

SWOSU took home fourth place. SWOSU sent seven players to the event and the highest performer played as an individual. Ashlyn Acosta finished the two rounds at +10 and T13. She accumulated six birdies during her play, which was tied for third highest at the event.

The highest finisher that competed for SWOSU’s team was Rebecca Lau. She shot rounds of 76-76 to finish at 10-over. Freshman Faustina Pergolini had the best tournament of her Bulldog career, coming in right behind Acosta and Lau, finishing 11 over and T16.