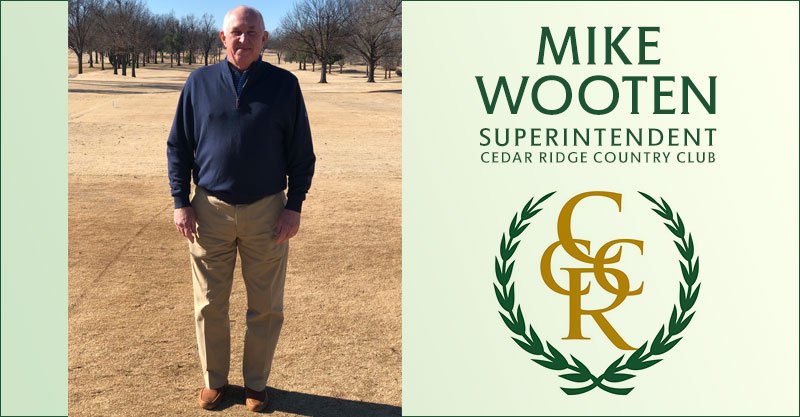 At 6 a.m. on Oct. 13, 1986, Mike Wooten assumed command of maintenance operations at Cedar Ridge Country Club in Broken Arrow. It only seems like he’s scarcely been off the grounds since.

Come Jan. 31, 2021, Wooten’s 34-year-plus run of keeping Cedar Ridge as one of the best maintained courses in the country comes to an end. The 67-year-old is retiring to spend more time traveling with wife Gail, tending to his four grandchildren and playing the game with his many friends and associates.

His absence will leave a void for his fellow superintendents throughout the state and nation, who use Wooten and his vast knowledge of all aspects of golf course maintenance and construction as a sounding board. “For dozens of guys that I know, he’s the go-to guy for knowledge,” said Derron Day, current superintendent at recently renovated Firelake Golf Course in Shawnee and a Wooten assistant from 1988-94. “He has the most brilliant mind I’ve known in the industry and his knowledge is so vast. And he’s always willing to help, whether it’s a Ma-and-Pa club or one of the top courses in the state.”

Day is one of 25 former Wooten assistants who have gone on to become head superintendents. And that doesn’t count many former head superintendents Wooten has hired to help get back on their feet after things didn’t go quite right at their previous positions.

The former assistant who confers with him most frequently is son Jared, who began his career making $2.15 an hour in 1988 at age 12 raking bunkers and running a weed eater for his dad. Hooked on the profession, Jared followed in his father’s footsteps to Oklahoma State University earning a degree in agronomy, and is now the head superintendent at Stillwater Country Club, where Mike was also the superintendent from 1982-86 before going to Cedar Ridge.

Jared joined his father after working briefly at The Golf Club of Oklahoma following college and was on staff from 2002 until leaving for Stillwater in 2006. It was then that he realized how respected his father was throughout the industry.

“When he was president of both organizations, it began to dawn on me how important he was,” Jared said. “We talk virtually every day. He’s a great support for me and for a lot of guys in the state. He’s had a remarkable career.”

Bob Randquist, now the Chief Operating Officer of the Golf Courses Superintendents Association of America, was Wooten’s counterpart at Southern Hills Country Club for 20 years. They still talk frequently and he said Wooten’s reputation as an excellent resource is because he not only has a vast working knowledge of all aspects of the industry, but because he is more than willing to help.

“It’s a testimony to Mike’s character that he responds to anyone who calls him, because we both know superintendents at high-profile clubs don’t always behave that way,” Randquist said.

Wooten’s naturally curious and inquisitive mind have led him to being an expert in many facets of the job they don’t teach in college. He is very adept at construction and whether greens or tee boxes, Cedar Ridge has saved vast sums by having Wooten and his team perform jobs that others would have required the assistance of specialists.

“That is one of the things I’m proud of,” Wooten said. “Over the years we’ve rebuilt or changed out about everything out here, greens, tee boxes, fairways, bunkers. On most of it we did the engineering work, the design work, the construction work. It’s nice to be able to put your footprint on a course of this quality.”

When the club brought in architect Tripp Davis to do a master plan and begin improvements to tee boxes and bunkers, Wooten and his crew were ready to implement the changes.

“What made Mike so well respected was first he is a good person and a straight shooter,” Davis said.  “What you see is what you get.  Beyond that I don’t know anyone that knows as much about growing grass, especially greens. Couple that with the fact he does not compromise in doing things the right way and you have someone who should be as well respected as he has been for so long. “

Wooten’s routine at Cedar Ridge from the first day until Buddy Phillips retired in 2012 was to have lunch with the long-time head professional, who protected him from well meaning self-appointed agronomic experts.

“Buddy was great,” Wooten said. “He would hear it all first because everyone comes through the pro shop. He would stand up for me, protect me and give me the freedom to do my job.”

Perhaps even more than most in his hyper self-critical field, Wooten’s quest for perfection made him a stern boss who has somewhat mellowed over time, but also one who couldn’t fully enjoy a round of golf without noticing 10 maintenance items he thought could be done better. That quest for improvement comes at a price but it also is why he was one of the best for more than four decades.

Wooten grew up in Webbers Falls and attended OSU from 1975-78. He was hired in January 1979 as an assistant to Steve Wilcoxen at Ponca City Country Club. Wilcoxen was one of the most driven and respected superintendents in the state and a perfect mentor for Wooten.

“Steve was highly organized, a great thinker, sharp in every way and a former player at Iowa State,” Wooten said. “People will tell you that in those days Ponca City was as good in terms of condition as any club in the state.”

Wilcoxen later went on to help open Karsten Creek in Stillwater, while Wooten became the head superintendent at Stillwater CC in 1982 during the years when it was often the site of Oklahoma State events and had a high profile, helping him land the job at Cedar Ridge. He missed the 1983 U.S. Women’s Open at Cedar Ridge, but has had the course in magnificent shape for numerous other high-profile events, including five LPGA tournaments from 2004-2008, numerous USGA qualifiers, high school and college events and junior championships such as the AJGA Tulsa Open held in 2020 and scheduled again in 2021.

With the membership nearly full and the course in superlative condition, Wooten said now is the ideal time to turn it over to a younger man. He has an honorary membership and will always be available for consultation and to provide historical knowledge, but will try to stay out of his successor’s way and enjoy the game.

“The course right now is as good as I’ve ever seen it, the way I’ve always wanted it to be,” Wooten said. “So I feel comfortable leaving. The curse of being a superintendent is you completely overlook the good qualities of your course and just focus on the imperfections. That carries over to your personality a little bit and you spend your whole life looking for ways to constantly improve. But I think that’s part of what drives you to be good at this job.”

“Mike was a perfectionist and that was a great thing for our members,” said longtime Cedar Ridge General Manager Cleve Stubblefield. “He kept the club at a very high level for over three decades and we’re all very indebted to him.”