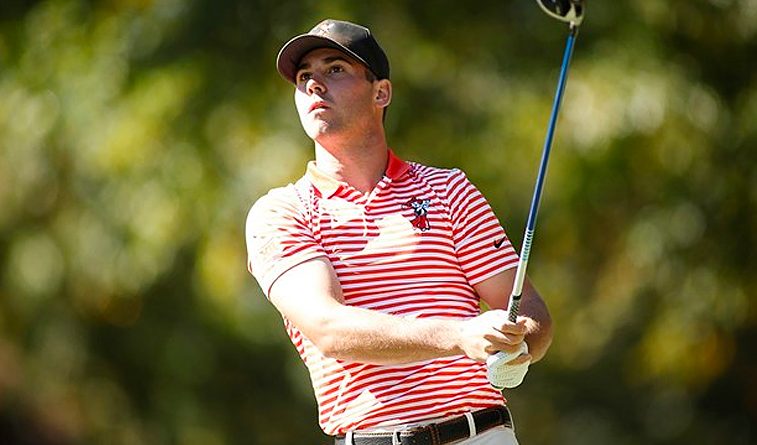 In a rematch of last year’s NCAA title match, the top-ranked Cowboys put the first two points of the day on the board behind wins from Matthew Wolff and Viktor Hovland.

In his match with Davis Shore, Wolff, won the first two holes and moved to a 3-up lead with a win at the fifth. The two players alternated wins over the next four holes, sending the OSU sophomore to the back nine with a 3-up advantage. Wolff took the 10th before Shore claimed the 12th. Wolff rolled in a long birdie at the 15th to close out the match.

Hovland trailed for the first 12 holes of his match with Frankie Capan before squaring it at the 13th. The junior took his first lead at the 14th and extended to a 2-up lead with a win at the 16th. He halved the 17th to put OSU’s second point on the board.

Senior Hayden Wood fell to Prescott Butler, 3 and 2, while Davis Riley defeated Zach Bauchou, 4 and 3, to square the match.

Wilson Furr erased a three-hole deficit against sophomore Austin Eckroat, claiming the 13th, 15th and 17th before halving the 18th for a 1-up victory and the deciding point.

The Cowboys will take on Duke in the consolation match tomorrow.

Live scoring is available at golfstat.com, while Golf Channel will cover the event from 2-5 p.m. (CST).

A pair of Cowboy freshmen also competed this week at the Southern Plains Intercollegiate at Gaillardia Country Club.

Rasmus Neergaard-Petersen carded a pair of 73s before a 78 to finish at 224 and tied for 11th place.