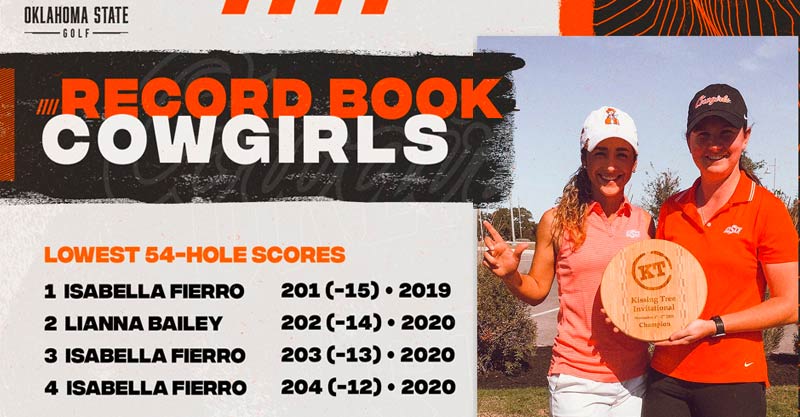 Bailey’s 65 tied for the third lowest round in OSU history, and her 14-under 202 for the tournament is the second lowest 54-hole total ever posted by a Cowgirl. She tallied a tournament-best 19 birdies and a 2.75 scoring average on par-3 holes – second-best in the field.

The individual victory is the third under second-year head coach Greg Robertson and the 90th in school history. The Cowgirls now have three members of the roster with a victory under their belts – Bailey, Fierro and Maja Stark.

Fierro, who finished in a tie for second after rounds of 70-67-66 (-13) 203, now owns three of the top four 54-hole scores in Cowgirl golf history. Just a sophomore, Fierro now has eight career top-10 finishes and the lowest career scoring average in program history.

And the Cowgirls didn’t stop there. Stark and Rina Tatematsu finished in a tie for ninth place, shooting 3-under 213. Stark surged in the third round shooting six under on the day with eight birdies and a 6-under 66.

The Kissing Tree Invitational, an individuals-only event with no team scores, wrapped up the fall slate for OSU. The Cowgirls will return to action on Feb. 7-9 at the LTWF Heroes Invitational in Sarasota, Florida.