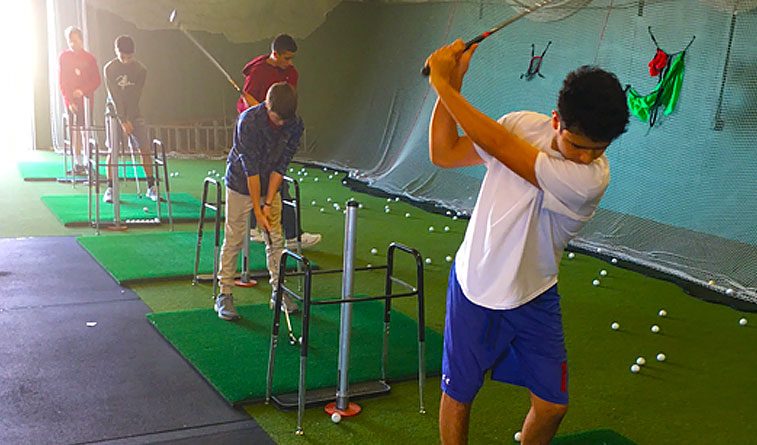 When the cold winds of winter blow and temperatures plummet, one high school golf program doesn’t mind. Thanks to the resourcefulness of coach Kem Morrow, the Bixby Spartans are still able to practice and improve.

Ringing the outside are nets for full shots, a third putting and chipping green and two large areas to work on pitch and chip shots, both with targets including modified trampolines and large metal tins similar to those used to water cattle.

Morrow did a lot of the plumbing and electrical work himself but was also assisted financially and physically by a large and active booster club that annually raises approximately $35,000 in a fund-raising golf tournament at White Hawk Golf Course in Bixby.

The money has not only helped build the multi-use indoor facility, but also allows Morrow’s teams to play a full schedule of tournaments. And, thanks in part to the facility and also the dedication of Morrow and his staff, the Bixby program now boasts 75 golfers from the eighth grade up, and it is growing.

This year the girls’ team, led by Oklahoma City University signees Natalie Gough and Rachel Eckert, is a legitimate threat to win the Class 6A state title. The boys team, though maybe not yet at the level of Edmond North and Owasso, is also showing consistent improvement. Morrow predicts that his current freshmen will win a state championship before they’re through.

“Having this place to come and practice when the weather is bad has helped us a lot,” Gough said. “It allows us to keep our games sharp all winter.”

“It’s great to have this when it’s 40 degrees or below,” said Kyle Peterson, one of the top players on the boys’ team. “I use it mainly for taking video of my swing and analyzing it.”

Morrow, who has recovered wonderfully from a stroke he suffered this past summer, attends nearly 40 tournaments each spring between the various teams from eighth grade up for both girls and boys. The others practice either at White Hawk or the on-campus facility supervised by the staff, which includes assistant varsity coach Scott Reno and junior high coaches Michael Masters, Earline Moore and Shannon Huerta.

“I don’t know of any other school that has anything on campus like what we have here,” Morrow said. “I know Jenks has a nice indoor facility off campus but it’s not as large as this. It’s been a great help in building the program.”

“Kem has done a wonderful job,” said Bixby Athletic Director Jay Bittle. “The time and energy and money he’s poured into this building and this program, you couldn’t ask for anything more. He turned what was pretty much a dump of a building into something unique and really beneficial for the kids.”