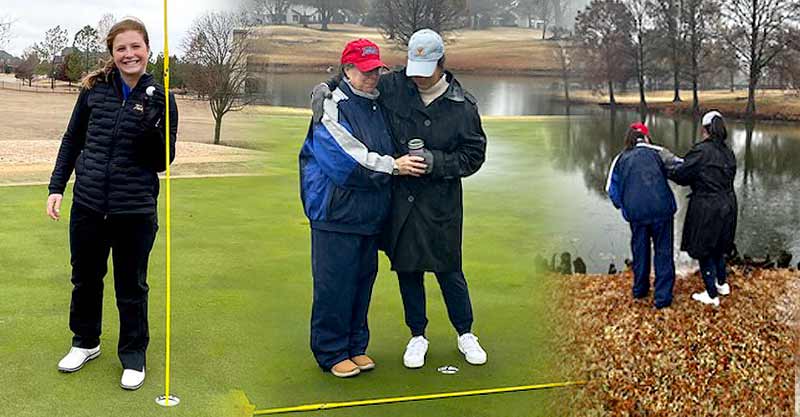 Dale McNamara’s favorite hole on her favorite course was the par-3 15th at Cedar Ridge Country Club, a beautiful uphill shot with the green perched precariously above a pond to the left and steep fallaways to the right and behind. It was a shot she had made a hole-in-one on during her accomplished playing career, her husband Jim made one there as well, and one she said began a rigorous four-hole closing stretch that separated the champions from the also-rans at numerous tournaments and practice rounds there over the decades.

It was fitting that daughters Cathy, Melissa and a few close friends and family gathered there on a drizzly, grey afternoon in late November to spread the ashes of the University of Tulsa coaching legend, who passed away Oct. 30 at age 86 after gamely battling cancer for several years.

Probably her final time to see the hole was during the second round of her namesake Dale McNamara Invitational Oct. 11-12 and this writer was fortunate to be escorting her around in a cart that day. She remarked that it was her favorite hole, reminisced about the ace and, while still looking ahead optimistically, seemed completely at peace with the wonderful life she had lived.

A few days later Dale’s final day on a golf course was riding with her former player Maggie Roller to watch Maggie’s daughter Jenni Roller play a round at the Golf Club of Oklahoma. The bond between those three is deep, watching and tutoring Jenni was one of Dale’s great joys over the past few years and Maggie’s speech at Dale’s funeral was moving.

So, call it what you will, let’s go with appropriate. Jenni, a freshman at Tulsa, on Dec. 10 made her first hole-in-one . Where? Of course, the 15th hole at Cedar Ridge,  knocking it in from 167 yards with a 6-iron. It was two weeks to the day after Dale’s ashes were spread there and approximately the same time of the afternoon. Sometimes you just have to shake your head in wonder at the forces at work in this world. What a spectacular tribute to her mentor and friend and a lifelong memory.