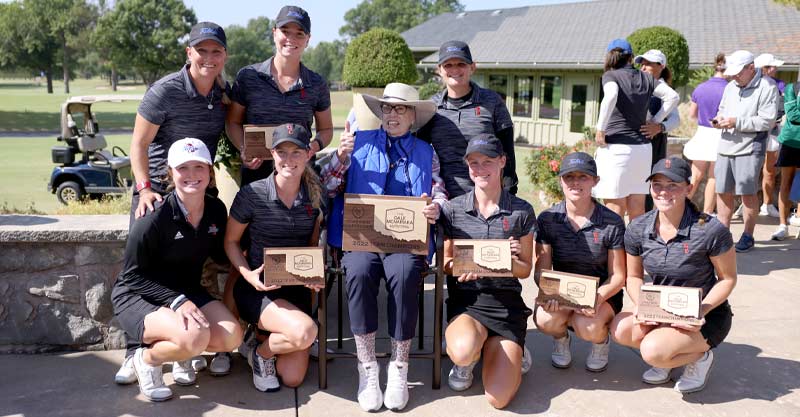 With legendary coach and tournament namesake Dale McNamara as enthusiastic cheerleader, the University of Tulsa women’s team took another big step forward as a program Tuesday, gutting out a one-shot victory over Nebraska in the Dale McNamara Invitational at cool, breezy Cedar Ridge Country Club.

Led by a 1-under final-round 71 from Sydney Seigel, Tulsa clawed out a 2-over 290 for a 4-over 54-hole tally of 878. Nebraska, paced by individual medalist Miu Takashashi and Kelli Strand, who each shot 3-under 69 Tuesday, charged from behind with an 8-under 280 final round only to fall one shot short.

South Florida, the 36-hole leader, shot a final round 299 to finish third in the 13-team field at 874. Oral Roberts University struggled, finishing last in the field.

It was the second consecutive victory for Tulsa, having won the Barbara Nicklaus Cup the week before on a brutally hard Muirfield Village course in Dublin, Ohio, in which the club presented the eight-team field with greens as hard and fast as pool tables and the winning score was 88 over for 54 holes.

This was a much fairer test of the abilities of all the players in the field, one in which skilled shots were rewarded and poor shots punished. Tulsa’s Lovisa Gunnar hit a lot of those good shots. The Swede shot rounds of 73-68-73 to take second individually at 2-under 214, a shot behind Takashashi.

Tulsa freshman Grace Kilcrease continued to impress, shooting 73 to finish tied for sixth at 1-over. Lily Thomas also shot 73 and finished tied for 10th at 2-over while Seigel’s final round lifted her into a tie for 16th at 7-over.

In the early stages of her fifth year at Tulsa, coach Annie Young is building a team that is showing some resilinece and spirit. TU may never reach the levels it did under McNamara, who won four national championships and finished second in five others, but to play the way it did under her gaze was a reflection of Young’s grit and determination to make this work.

“We clutched up there at the end and made some big putts on 17,” Young said. “We’ve got a young group and they don’t care, they are just going to play the course in front of them.

“They have played solid golf the whole semester. Jenni (Roller) is not in the lineup right now, but she will be. We’re six deep and really pushing each other and it is fun to see. Winning becomes a habit or an expectation that we are going to play good golf.

“We’re making big strides toward where we want to be. We like to be in the mix now and we’re not afraid to be in the mix, and that’s a whole different mentality. And these girls are good, they are really talented.”

McNamara, who is battling a rare form of cancer, was on hand for most of the 54 holes. Three members of McNamara’s highly successful teams of the late 1980s and early 1990s were on hand for support. Maggie Roller, the director of instruction at Ceadar Ridge and a major tournament organizer, had friends Blue Kinander and Cathy Mockett staying with her and lending support and encouragement to both Dale and the current team.

“This has just been such an inspiring week,” McNamara said. “To have Maggie, Blue and Cathy here. To watch Annie’s great young team. And so many of the girls competing have come up and said hello and even thanked me. It’s just been wonderful and made me feel so much better. “

“Dale is like a second mom to us,” Mockett said. “What she did for us and for women’s college golf was truly amazing and for the competitors here to be appreciative is just great. I know that makes her very happy.”