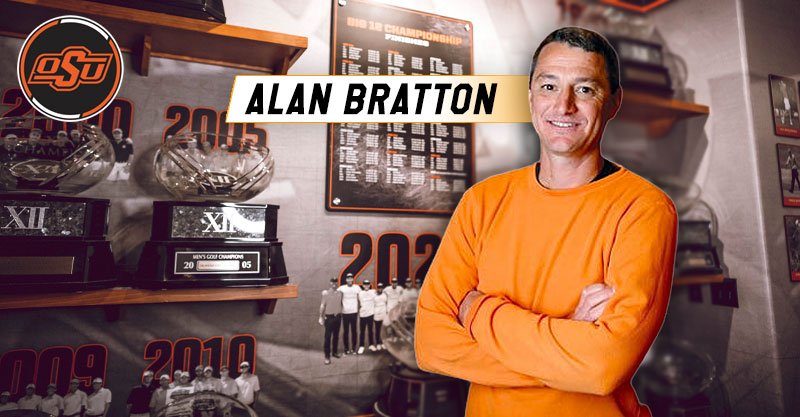 While the state may be fixated on a possible Bedlam duel in match play, OSU coach Alan Bratton projects nothing but calm and confidence as his Cowboys prepare for the NCAA Championship beginning Friday at Grayhawk Golf Club in Scottsdale, Ariz.

Coming off a victory in the Columbus Regional at Ohio State’s Scarlet Course, the second-ranked Cowboys will be paired with No. 1 Oklahoma and No. 3 Vanderbilt for the first two rounds. Teams play 72 holes of stroke play to determine the eight qualifiers for match play next Tuesday and Wednesday.

“We’d love to finish first in stroke play and go into match play as the No. 1 seed,” Bratton said. “OU has played very well and earned that No. 1 ranking. But our team is good, certainly capable of winning this and we’ve proved all year that we can beat anyone in the country.”

Bratton is pleased with the challenge that Grayhawk presents as a par-70 playing up to 7,289 yards. He said the fairways are tight, the rough is lush and the greens are firm and fast.

“It did a great job last year of separating the best teams,” Bratton said. “I believe the highest ranked team to make it to match play was ranked 11. So that’s what you want, a course that identifies the best teams. That’s always good for Oklahoma State.”

Oklahoma State will start Ben Hogan Award finalist Eugenio Chacarra along with red-hot Aman Gupta. Brian Stark, Jonas Baumgartner and Bo Jin are in the starting five, with senior Rasmus Neergaard-Petersen as the sub. All are healthy and all playing well, Bratton said.

“These guys have all won or done really well in stroke play and match play,” Bratton said. “They are confident and accomplished no matter what the format.”

While they may not have the star power of his 2018 and 2019 teams that featured Viktor Hovland and Matthew Wolff, the depth of this team is its greatest strength. Bratton said having no weak link makes OSU a formidable opponent in match play.

“We’re a difficult matchup for anyone,” he said. “We have five guys that have proven they are capable of winning tournaments and matches, so if one guys is off the others can pick him up.”

What 2 Watch 4
• Oklahoma State’s men’s golf team will seek its 12th national championship this week when it begins play at the NCAA Division I Men’s Golf Championship at Grayhawk Golf Club.
• The Cowboys will be the No. 2 seed for the event.
• Seniors Eugenio Chacarra and Aman Gupta as well as junior Brian Stark and sophomores Jonas Baumgartner and Bo Jin comprise the lineup. Senior Rasmus Neergaard-Petersen will be the substitute.
• The tournament will run May 27-June 1 and will consist of 72 holes of stroke play to determine the eight teams for the match play portion of the tournament as well as the individual champion.
• After Sunday’s third round, the 30-team field will be trimmed to the top 15 squads and top nine individuals not on an advancing team for Monday’s fourth round.
• The top eight teams will then be placed into a match play bracket to determine the team champion.
• The quarterfinal and semifinal matches will take place on Tuesday and will be followed by Wednesday’s championship match.

#okstate Championship History
• OSU has won 11 NCAA titles and has produced nine individual national champions with its most recent national championship coming in 2018 at Karsten Creek.
• OSU’s first NCAA crown came in 1963 under Labron Harris.
• Former head coach Mike Holder captured eight titles (1976, 1978, 1980, 1983, 1987, 1991, 1995 and 2000).
• Mike McGraw won the crown in 2006, while Alan Bratton won his first in 2018, giving all four coaches in program history a title.
• OSU has produced 17 runner-up finishes after placing second in 2014 at Prairie Dunes Country Club.
• Earl Moeller was OSU’s first individual champion in 1953 and was followed by Grier Jones in 1968. David Edwards won in 1978 and was followed by Scott Verplank, Brian Watts and E.J. Pfister, who won consecutively from 1986-88. Charles Howell won in record-setting fashion in 2000 and was the program’s seventh national champion. Jonathan Moore won in 2006 and Matthew Wolff took top honors in 2019.
• The Cowboys have now competed at the NCAA Championship in 74 of a possible 75 years, including an NCAA-record string of 65 consecutive appearances from 1947-2011.
• After their semifinal finish in 2021, the Cowboys have finished first or second at the event 28 times (11 titles, 17 second-place showings) and have finished in the top five 56 times. The Pokes have finished third on six occasions, fourth 12 times and have been the fifth-place finisher 10 times. OSU has five other top-10 finishes.