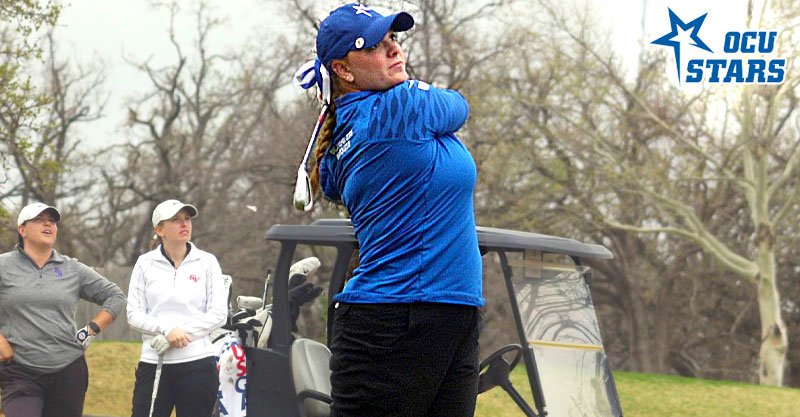 The Stars had a team score of 2 shots over par as OCU completed 10 holes before teams were pulled off the course due to darkness. Those teams who have yet to finish the first round will resume play 7 a.m. Thursday.

Once the first round is complete, the teams who played in the late group will continue play into the second round Thursday. Those teams who teed off in the evening were scheduled to begin the second round in the early wave Thursday. The tournament will be reduced to the top 17 teams and 40 individuals including tied teams and individuals for the final spots for the final round Friday.

Rain delayed the start of play Wednesday until 11:30 a.m., and golfers played under rainy conditions throughout the day. Approximately 0.65 inches of rain accumulated Wednesday, and around 4¾ inches of rain have fallen in the Oklahoma City metro area over the past week. The temperature hovered in the mid-50s with winds at 10-15 mph Wednesday. The weather forecast calls for improved conditions over the rest of the week.

OCU’s Maddi Kamas put together a 1-under-par score through 11 holes. Kamas, a freshman from Kingfisher, Okla., buried birdies on three of the first five holes. Kamas knocked down birdies on the par-5, 581-yard first hole, par-3, 150-yard third hole and No. 5, a par-5, 451-yard hole.

MinJi Kang from Truett McConnell (Ga.) was the individual leader in the clubhouse with a 36-33–69.