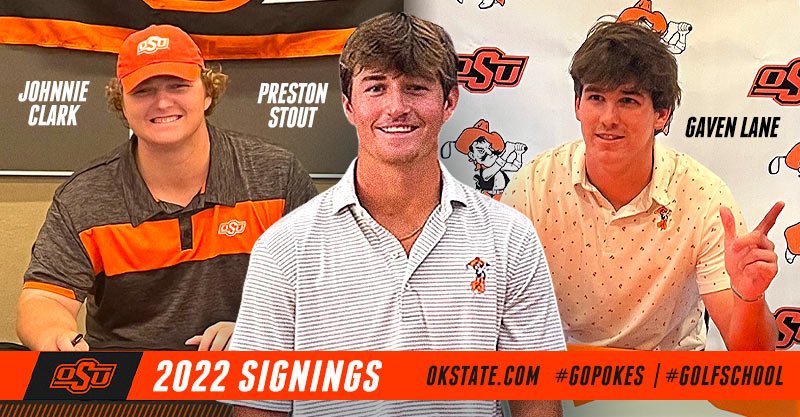 STILLWATER, Okla. – Oklahoma State’s men’s golf program enhanced its roster with a trio of highly-decorated prep standouts as Johnnie Clark, Gaven Lane and Preston Stout all signed National Letters of Intent and will join the Cowboys next season.

“This class is a great combination of talent, athleticism, experience and upside. We could not be more excited to have these three join our program. They will make an immediate impact and can be leaders for us for years to come,” OSU head coach Alan Bratton said.

“Johnnie is a very good ball hitter who won a couple times last year on the AJGA circuit, made it to the round of 16 at the U.S. Junior and earned a spot on the Junior Presidents Cup Team on his way to being named a second-team AJGA All-American,” Bratton said.

Clark posted rounds of 72 and 69 at the U.S. Junior Championship this past summer before advancing to the round of 16 during the match play portion of the event. He fired rounds of 68, 68 and 63 last April to win the PING Heather Farr Classic by six shots. Clark also owns a victory at the 2021 Billy Horschel Junior Championship.

A member of the United States Junior Presidents Cup Team this past fall, Clark currently carries a No. 24 ranking in the Golfweek Boys Junior Rankings. He was named a second-team AJGA All-American in 2022 as well.

“Gaven has been committed to us for a long time and it is great to finally have him on board,” Bratton said. “He has been one of the best players in Texas for years. Not only is he a state champion, he has won a lot of tournaments and has already played the U.S. Amateur twice.”

In 2022, Lane won the Texas 4A state title after finishing as the runner-up the previous year. In the process, he helped Argyle capture its second-straight team title as well. During the 2021 campaign, he registered a fifth-place showing at the AJGC Northwest Arkansas Junior after finishing as the runner-up at the Texas Junior Amateur and winning the Patrick Reed AJGA Junior Championship with scores of 64 and 69 in 2020.

Lane competed at the U.S. Amateur Championship in 2018 and again in 2022. He is currently No. 13 in the Golfweek Boys Junior Rankings and was tabbed as an honorable mention AJGA All-American in 2020.

“Preston is a very good athlete who is coming off a really nice summer. He was runner-up at the state high school championship, a Junior Presidents Cup Team member and a first-team AJGA All-American,” Bratton said. “He is a leader and I love that Preston and Gaven already have a strong friendship from playing against each other in the Dallas area.”

In 2021, he won the Byron Nelson Junior Championship and the AJGA Carolina Trace Junior in addition to top-five showings at the Texas Junior Amateur and Patrick Reed AJGA Junior Championship. On two occasions, Stout has been the runner-up at the Class 6A state tournament.