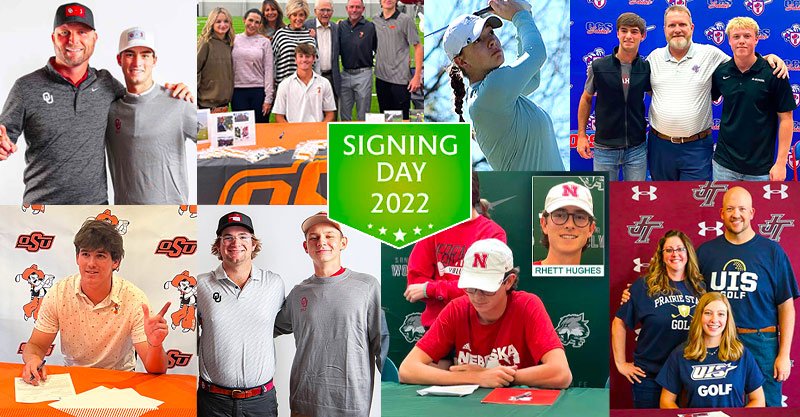 Ryder Cowan and Bryant Polhill, teammates at Oklahoma Christian School and junior golf rivals, became two of the first Division I golf signees of the early signing period Wednesday when they accepted offers from Oklahoma and Kansas State, respectively.

Cowan, the 27th-ranked junior in the country and 21st in the class of 2023 by Junior Golf Scoreboard, joins Drew Goodman, Jaxon Dowell and Jake Hopper as Oklahoma high school and Oklahoma Junior Golf Tour products on the talented Sooner roster.

Polhill, meanwhile, follows the path set by another golfer his high school coach Tosh Hays works with in Robert Streb, who went to Kansas State from Edmond North before embarking on a PGA Tour career that began in 2013 and is still going strong.

Cowan and Polhill had a heated battle as juniors last spring in the Class 3A state championship at Lakeview Golf Course in Ardmore before Cowan prevailed by five shots.

“I knew that I had to do something special because I knew Bryant was behind me and he was coming, he played good all three rounds,” Cowan said at the time. “I’ve played against Bryant since we were nine years old and we’ve always had this competitive rivalry, but he’s always great to be around, a great teammate, and a great guy, it can’t get better.”

Cowan joins an Oklahoma class that also includes P.J. Maybank of Cheboygan, Mich., the ninth-ranked junior in the country, and Connor Henry of Fort Worth, Texas, the son of PGA Tour player J.J. Henry.

“Ryder has a great set of hands, he’s wonderful around the greens and continues to show at the highest levels that he is of the highest caliber,” said OU coach Ryan Hybl. “And he’s going to get so much better. We can’t wait to get him in here and help him along his journey.

“One thing about Ryder and all the Oklahoma guys, they fit here and they understand the level of competition. Ryder will thrive in that. In my mind, I am expecting him to come in and compete for a spot right out of the gate. He knows what’s in front of him.”

Hybl said Cowan is a very skilled ball striker with plenty of length and speed. He said Cowan has been frustrated with his putting but he expects that will be a strength for him.

Cowan had six wins and four seconds and a 68.6 scoring average as a junior after notching six wins and finishing second in the state championship as a sophomore. He lost his freshman season to the Covid shutdown.

Cowan said he was thrilled to be able to sign with OU, having been a Sooner fan since he first swung a club. He said he plans to continue to work hard his senior year and be ready to compete with his friends Goodman, Dowell, Hopper and the other Sooners he has come to know.

“I love all those guys, and there’s nothing wrong with competition,” Cowan said. “To be ready for next year I just need to keep working on my ball striking, being able to work the ball both ways a little better, and keep after the short game. My putting finally is coming around after not being so great this summer.”

He was also thrilled for Polhill, saying the two had been playing together since both took up the game.

“I love playing against Bryant, we do it all the time and we bring out the best in each other. It’s cool to see we both made it to the highest level of collegiate golf.”

Polhill had one win and seven top-five finishes while finishing third at the state championship as a sophomore, averaging 72.3 strokes per round. He improved to 71.1 with one win, three seconds and three thirds in 2022. He and Cowan will be the odds on favorites again this spring.

“Ryder has one of the best work ethics of anyone who has played for me at OCS,” Hays said. “And Bryant has a great work ethic. They both keep working hard trying to get better and both have aspirations to play beyond college. For the last three years they’ve really pushed each other and at least three times in various tournaments they’ve gone head-to-head. Any golf coach would be lucky to have either and I’ve been blessed to have both of them.”

The three-man class consists of three of the nation’s top players as Oklahoma will welcome Ryder Cowan, Connor Henry and PJ Maybank III to Norman next summer.

“All three of these guys are exactly the type of player we look for here at Oklahoma,” Hybl said. “They’re the perfect combination of elite talent, high golf IQ and grit. They’re excited to be Sooners and know that they’ll fit in perfectly with what we’ve built here. Overall, we’re just really happy to add them and their families to our OU golf family.”

Henry makes his way to Norman by way of Fort Worth, Texas, and is one of the top players from the Lone Star State. Winner of the 2022 Texas Cup Invitational and 2022 Bluebonnet Invitational, Henry also ran away with the Southwest Preparatory Conference Texas State championship with a tournament record score of 131 (-9) to win by 10 strokes. Henry is a two-time Texas State SPC first-team selection and is the only multiple-time winner on the Texas Legends Junior Tour. The son of Lee and JJ, Henry’s father JJ is a three-time PGA TOUR winner and a past USA Ryder Cup Team Member.

“Connor has big time potential and is crazy talented,” Hybl added. “He’s shown that he can complete at the highest level. We can’t wait to be part of his continued development. He has the pedigree, with his dad being a Ryder Cup member, there is no doubt that Connor has that same ability. We’re pumped that he chose to be a Sooner and I’m excited to see where his game can go.”

Maybank III, the top-ranked player in the Sooners’ class, comes to Norman as the No. 7 overall prospect in the 2023 class and is the top golfer from the state of Michigan. Maybank III is a second-team Rolex AJGA Junior All-American with 12 AJGA top-10 finishes, including wins at the 2021 Coca-Cola Junior Championship and the 2021 Randy Wise Junior Open. A member of the 2022 Junior Presidents Cup and Wyndham Cup teams, Maybank III was a 2021 USGA qualifier and a two-time Michigan Junior Match Play and Stroke Play Champion. In addition, the Cheboygan, Mich., product set the Michigan scoring record to win the Michigan state championship en route to first-team All-State honors. Maybank is a three-time Drive, Chip and Putt National Championship qualifier and won the event in 2018, joining current Sooner Patrick Welch as a DCP winner.

“PJ is a big time player,” Hybl said. “He’s shown that time and time again at the best tournaments in the country. Super elite ball striker who is incredibly smart about the game. He is definitely a grinder that understands different conditions because he’s played in it all. He absolutely fits who we are and what this program is about. We cannot wait to get him to Norman because with his skill level and ability to win, we know he’ll be ready to immediately make an impact here in Norman.”

The three signees will be added to a Sooners’ roster that signed three top-55 golfers in last year’s class and a pair of top-50 players the year before. Oklahoma wrapped up its 2022 fall schedule with a win at the Ka’anapali Classic and opens its spring at the Puerto Rico Classic in February. NOTES: Also signing Wednesday was Jenks senior Lily Stanton, a member of the 2022 Class 6A state championship team. She signed with Division II University of Illinois Springfield. She invited Oklahoma Junior Golf Tour director Morri Rose to the ceremony Wednesday afternoon at Jenks High School and he said he was proud to atttend.

Stanton started the season with an 11th-place finish at a tournament in Granbury, Texas, and she followed it up with ninth-place showing at the Edmond North tournament. From there it was the Bixby tournament (tied for second), the Jenks Invitational (ninth place), the 6A state preview tournament (seventh) and the Union Invitational (seventh). At the Frontier Valley Conference tournament, Stanton was second to earn All-Conference honors. She then capped her season with a third-place finish at 6A regionals and then a tie for second at the 6A state tournament, where the Trojans won the team title. Hughes comes to Nebraska from Edmond, Oklahoma and attends Edmond Santa Fe High School, where he will graduate in the spring of 2023. Hughes is coming off a stellar junior season, where he placed runner up at the Oklahoma Golf Association Junior Amateur Championship at Lincoln Park. He also placed third at the Red River Challenge which consists of the top juniors in Texas and Oklahoma.

“It’s been great getting to know Rhett and he’s going to be a fantastic fit to our program,” Cornell said. “He will have a great opportunity to play immediately and really grow as a player. He’s shown that he can compete with some of the top juniors in the country on multiple occasions and I’m really excited for him because he’s going to have a great career here.”

Hughes chose Nebraska over Grand Canyon University and Pacific. When asked about why he chose Nebraska, he said “it’s closer to home, it’s a higher level of competition, and I’ve always loved Lincoln and its environment,” he said. “I’ve always wanted to play in a Power 5 conference.”

Hughes also placed fourth at the AJGA GreatLife Junior Challenge along with finishing 10th at the Oklahoma 6A-1 State Championships. Duncan’s fast-rising star Jaiden Gregston, who placed third in the WOGA Junior Championship and tied for fifth in the Class 5A state championship, signed to play for Ball State University.

Check back for more Oklahoma signees as well as the signing classes of colleges throughout the state.