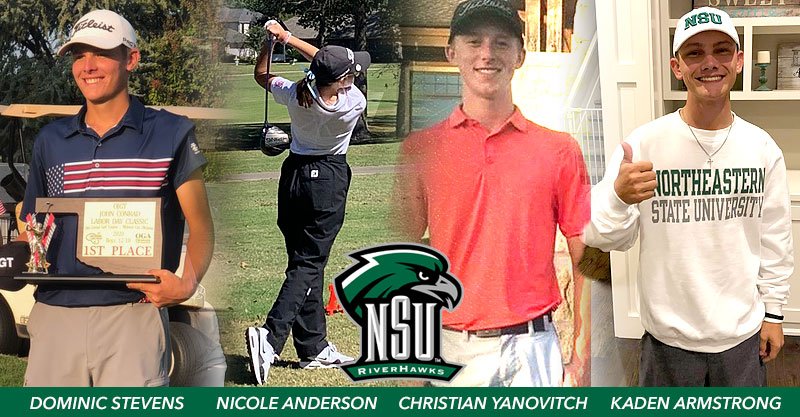 Northeastern State head men’s and women’s golf coach Scott Varner announced Wednesday the signing of four newcomers to the program. The team received National Letter of Intent from three men and one woman.

“Dom made incredible progress in a short period. He made phenomenal progress in the late summer and this fall and has improved more than any player I have seen in recent years. Dominic went from a slightly above average player to a stud in the State of Oklahoma in about four months. He is athletic, has excellent championship character, and is eaten up with the game. He has a great passion for the game, and is expected to continue on this trajectory and be an elite player for NSU.” – Head coach Scott Varner

Personal – Son of Catherine and Jeff … has two sisters (Harley and Ryleigh) … born on June 15, 2003 … Plans to major in accounting.

“Outstanding character, again, what I call ‘Championship Character.’ He is incredibly raw, very strong and athletic. Christian is also new to the game and extremely hungry. He competed at a high level in some events this past summer and got the coaching staff’s attention when he beat numerous college players in this region at a large amateur tournament at Shangri La. The sky’s the limit for Christian.”

Personal – Son of Heather and Vince .. has four brothers (Alex, Benjamin, Luke, Nathanael) and four sisters (Elizabeth, Leah, Rachel, and Sarah) … born on Jan. 9, 2003 … Listed his greatest sports accomplishment as hitting his first home run in Little League … Was the top finisher among those younger than college age at the Shangri-La Invitational in Oct. 2020, placed 11th overall in the collegiate division … finished tied for eighth in the Tulsa AJGA tournament in June 2020 with a 75.

“Kaden comes highly recommended from a program that has provided numerous great players to Northeastern State over the years; including All-Americans and All-Region players. He is tough-minded and plays with a great confidence level, which is priceless. He has an excellent resume and will get better when he joins the RiverHawk Golf Family. He loves to compete; iron will sharpen iron when he arrives in Tahlequah.”

Personal – Son of Kelly and Dustin … has one brother (Jackson) … born on April 30, 2003 … Plans to major in the business college … Lists favorite sports moment as winning the Walter Hopper South Central championship at Indian Springs shooting 70(-2) on the river course and 68(-2) on the lakes course before beginning high school.

“She plays out of the infamous Woodlands, a fantastic golf community. She is an accomplished player and is improving rapidly when you look at her trend of scoring over the last couple years. She has Oklahoma connections as she spent time living in Bixby, she knows a couple of our players. I’m very confident she will be able to come in and help us and at the rate she’s improving maybe sooner rather than later. She has a very aggressive swing, makes a good move at the ball and hits with explosive power.”