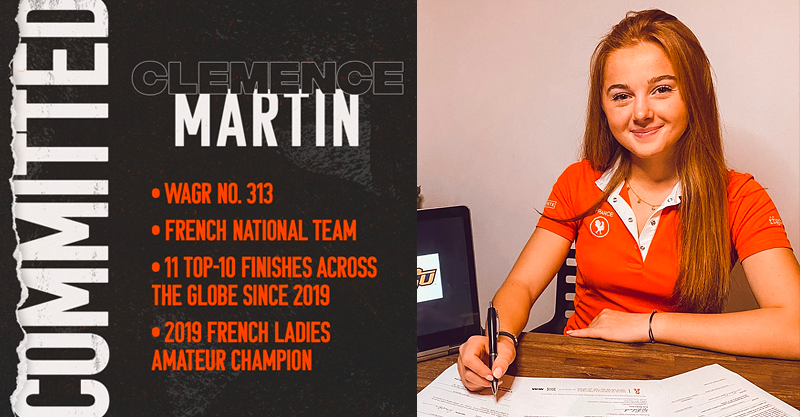 Martin, who won the 2019 French Ladies Amateur Championship with a one-stroke victory at Golf Des Yvelines, is currently ranked No. 313 in the World Amateur Golf Rankings (WAGR) and is listed at No. 52 in the European Golf Rankings.

The Paris native represented her country at the European Girls’ Team Championship in September in Slovakia, and tied for 13th at the 2020 European Ladies’ Amateur Championship after rounds of 67-71-72-68 at the Cubo Golf Course in Slovenia.

She also closed the 2019 season with runner-up finishes at the Grand Prix De Joyenval and the Belgian International Amateur Championship.

Martin joins a Cowgirl squad currently ranked No. 13 nationally by Golfweek. OSU is coming off an individual victory by junior by Lianna Bailey, which was the third individual win by the Cowgirls in 11 events under Robertson.

Sophomore All-American Isabella Fierro is ranked as the No. 9 individual in the country by Golfweek, while Maja Stark is listed at No. 13 in the WAGR.

The Cowgirls will tee off the spring season at the LTWF Heroes in Sarasota, Florida on a Feb. 7.